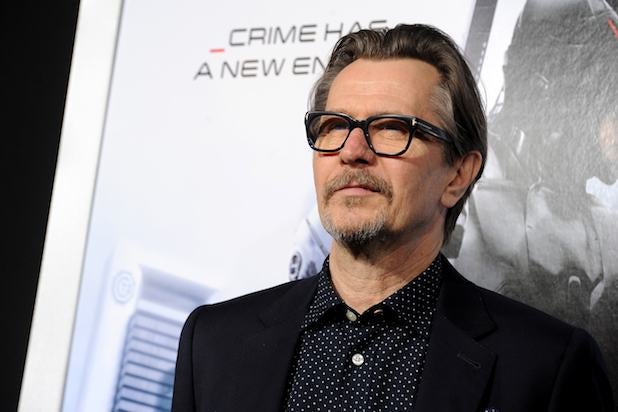 Gary Oldman might not be the only actor fed up with the new look of Hollywood, but suddenly he’s the most vocal.

In a surprisingly frank Playboy interview, the “Dawn of the Planet of the Apes” star eviscerates a film industry that has made him millions while also coming across as strangely supportive of ostracized celebrities like Mel Gibson and Alec Baldwin.

1. On Hollywood’s sensitivity toward racism:
“At the Oscars, if you didn’t vote for ’12 Years a Slave’ you were a racist.”

2. On the political correctness police:
“I just think political correctness is crap. That’s what I think about it. I think it’s like, take a fucking joke. Get over it. I heard about a science teacher who was teaching that God made the earth and God made everything and that if you believe anything else you’re stupid. A Buddhist kid in the class got very upset about this, so the parents went in and are suing the school! The school is changing its curriculum! I thought, All right, go to the school and complain about it and then that’s the end of it. But they’re going to sue! No one can take a joke anymore.”

3. On Bill Maher and Jon Stewart’s free pass:
“Well, if I called Nancy Pelosi a cunt–and I’ll go one better, a fucking useless cunt–I can’t really say that. But Bill Maher and Jon Stewart can, and nobody’s going to stop them from working because of it. Bill Maher could call someone a fag and get away with it. He said to Seth MacFarlane this year, ‘I thought you were going to do the Oscars again. Instead they got a lesbian.’ He can say something like that. Is that more or less offensive than Alec Baldwin saying to someone in the street, ‘You fag’? I don’t get it.”

4. On empathizing with Mel Gibson:
“I don’t know about Mel. He got drunk and said a few things, but we’ve all said those things. We’re all fucking hypocrites. That’s what I think about it. The policeman who arrested him has never used the word nigger or that fucking Jew? I’m being brutally honest here. It’s the hypocrisy of it that drives me crazy. Or maybe I should strike that and say ‘the N word’ and ‘the F word,’ though there are two F words now.”

5. On his political leanings:
“I would say that I’m probably a libertarian if I had to put myself in any category. But you don’t come out and talk about these things, for obvious reasons.”

6. On legalizing marijuana:
“It’s silly to me. I’m not for it. Drugs were never my bag. I mean, I tried it once and it wasn’t for me, though, unlike Bill Clinton, I did inhale. To me, the problem is driving. People in Colorado are driving high and getting DUIs. That’s what I worry about. Listen, if you want to do cocaine, heroin, smoke marijuana, that’s fine by me. It’s just that I worry about kids behind the wheel of a car more than anything.”

7. On his insecurities as an actor:
“At first I passed on [‘Tinker Tailor Soldier Spy’], but then I couldn’t stop thinking about it. Once I signed on, I thought, Fuck me! I can’t do this. I can’t pull this off. Everybody’s going to see what a fake I am. This is the moment I get found out. Who does he think he is? He thinks he’s Alec Guinness.”

8. On the death of colleague Philip Seymour Hoffman:
“On the outside someone like Philip Seymour Hoffman appeared to be happy professionally. He had kids; he was working with interesting people. But one never really knows. What eventually happens is you put the drink or the drug before everything else. There’s no argument about how good he was, but who knows what was going on inside? I don’t mean this disrespectfully, but maybe he looked in the mirror and always saw that very pale sort of fat kid. It’s a real tragedy for his family.”

9. On the importance of winning Oscars and Golden Globes:
“What people don’t realize is that you need to work at being a celebrity. I’m not talking about movies. I mean the other side of it. You have to campaign. It’s a whole other part of your career, and I wish I could have navigated it a bit better. I may have an Oscar now, had I… I know it certainly doesn’t mean anything to win a Golden Globe, that’s for sure.”