CBS News’ Gayle King wants to know if billionaires Richard Branson and Jeff Bezos, who both just launched themselves into space, are locked in an age-old competition.

“It really, to you, isn’t a game of ‘Whose is bigger?’ Honestly, it really isn’t?” asked the morning news anchor during a Wednesday chat with Bezos, who founded Amazon and thanked it customers and employees for funding his adventure Tuesday after his rocket touched back down.

Ignoring the innuendo, Bezos replied, “Gayle, I promise you it really isn’t.” 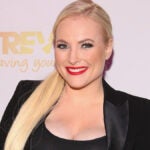 Also Read:
Meghan McCain Slams Jeff Bezos for Going to Space While Amazon Employees ‘Have to Pee in Water Bottles’

“Because on the outside looking in, even after you announced, then Richard Branson said, ‘I’m going up first,’ then you guys went higher — it’s really not a competition?”

Bezos insisted “it’s not a competition.”

Branson, the founder of Virgin Galactic, completed his own space flight last week.