Geena Davis has wrangled a trio of successful female creators from YouTube for a new campaign pushing for gender equality in media. Unlike her reckless roadtrip with Susan Sarandon in the legendary “Thelma & Louise,” this trip is headed for higher ground than the floor of the Grand Canyon in a Thunderbird.

Like the iconic 1991 film though, Ford is back on board.

“#ShesGotDrive” is a branded content campaign promoting gender equality on-camera, off-camera, and female empowerment throughout the media and entertainment industries. 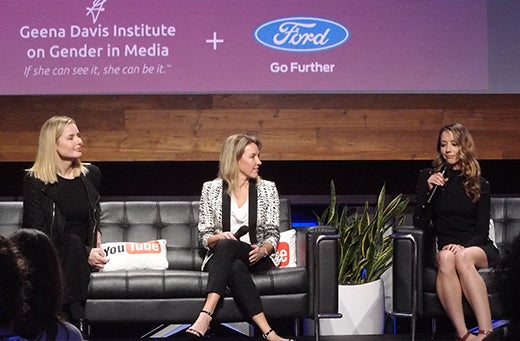 “The number of women in [on-camera] positions of power is lower than the abysmal reality of the real world,” Davis said at a launch event at the YouTube Space L.A. on Monday night. “It’s worse in fiction, where [writers] can make it up.  So we point this out.”

“[Entertainment] is the one segment of society with enormous gender inequality that can be fixed overnight – the next tv show, the next movie can be gender balanced. Go straight to half [of all characters on screen being female].” 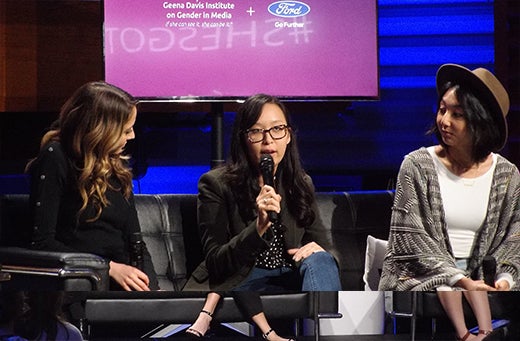 Kuang (center) said she hopes to direct a Harry Potter movie one day, when they reboot it in 20 years. (Mikey Glazer)

Lifestyle personality Taryn Southern (457k subscribers), filmmaker Yulin Kuang (27k subscribers), and musician Clara C. (aka. Clara Chung, 263k subscribers) are churning out Ford-funded content that highlights their own DIY-origin stories that led to their success. Each is hacking their own path to acclaim in comedy, film, and music through YouTube.

“Nobody looked like me when I was watching videos on MTV when I was six,” musician Clara C. said on stage. Now with an enviable following, Chung revealed the she got her stage legs as a toddler when she ran up and stole the microphone from a performer at a show. 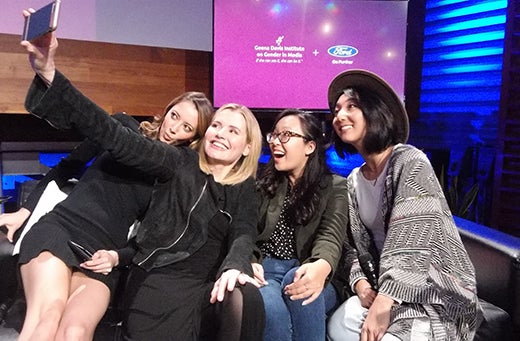 Filmmaker Kuang  turned to YouTube when her films mis-matched to the demographics of the indie festival circuit. She recalled looking out at the audience at a film festival and said “17-year-old girls are not here.”

The Oscar winner’s Geena Davis Institute on Gender and Media has a targeted focus: improving the portrayal of girls and women in media to children 11 and under. Davis is also busy off screen with the upcoming Bentonville Film Festival (yes, Arkansas) that she co-founded. It’s the only film festival that guarantees distribution for some of its winners and lined up major backers like Walmart and Lifetime after only two outings.

For Ford, this program launches during a pivot-point in the evolution of their entertainment footprint.

For sixteen-year-olds now getting drivers’ licenses for the first time, they have never been alive when  “American Idol” was not on the air. The cultural phenomenon was flooded with tight Ford brand integrations that became synonymous with the show for years.

“You’re going to see us continue to work on things that market our vehicles, which ‘American Idol’ was a great opportunity for us to showcase our vehicles,” Chantel Lenard, Executive Director of U.S. Marketing at Ford told TheWrap in a backstage greenroom on Monday night. “We’re also doing things like this project to highlight our values as a company, which is just as important.”

“People are becoming more and more interested in the values behind a company, not just the products they make,” Lenard continued.  “This is a good way for us to highlight how important it is for us to be inclusive and provide opportunity”