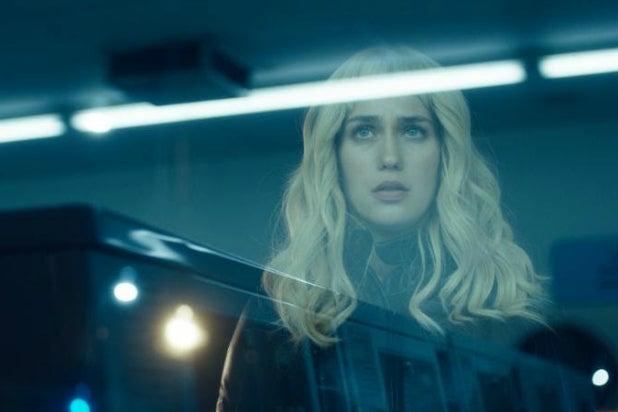 In “Gemini,” Aaron Katz regards Los Angeles the way many transplant filmmakers seem to: intrigued, repulsed and yet hopelessly in love. The allure resides in L.A.’s visible, unapologetic contradictions. No one wants you here, but everyone is quick to say, “Hello, hi, happy to have you” in anticipation of a time where they may need you. Relationships are transactional; people, disposable.

Katz understands this dubiousness from the get-go, beginning with the relationship between assistant (Lola Kirke as Jill) and starlet (Heather, played by Zoe Kravitz). The power dynamic is present, but not dominating. Jill is composed, honest and eager to defend her boss. When Heather decides to renege on a commitment she made with a filmmaker (Nelson Franklin, “New Girl”), Jill takes the wheel. When her agent subsequently rings, enraged, Jill handles it.

Is she responsive out of professional obligation, or personal affection? Is it work or is it friendship? The film blurs the line, especially as Heather confides in Jill. “You’re one of my only true friends,” she admits. In a bit of ingenious casting, Kravitz plays a prototypical movie-star: impossibly gorgeous, staggeringly smart and tragically alone.

For the film’s opening 25 minutes, the audience is introduced to an alternate cinematic experience. Katz leads us to believe we’re about to watch an inside-baseball showcase about the machinations of Hollywood, but “Gemini” proves to be more “The Fugitive” than “The Player.”

In a surprising turn of events, a murder changes the whole movie. (Death has a tendency to do that.) Without dispensing vital details, let’s just say Jill is tasked with discovering what happened and who did what, inadvertently enlisting herself as an amateur hawkshaw. The tonal shift could’ve easily undid what Katz built in his first act. It doesn’t. Instead, “Gemini” transitions into an at once sleazy and slick genre thriller, enigmatic without being alienating. There’s suspense in the movie’s central mystery, enough to sustain the characters Katz has created.

The heavy-lifting is done by Kirke (“Mistress America”), as she transforms mild-mannered, subdued Jill into a more powerful presence. As an act of self-preservation, Jill begins looking out for herself. This is especially true as Detective Ahn (John Cho) begins his rigorous line of questioning. Kirke and Cho have banter that moves across a wide emotional spectrum: concerned, playful, incredulous. It’s a testament to both performers that we’re given three-dimensional characters.

This prismatic nature of these characters is where Katz’s past comes into play. The Portland-born filmmaker has had a long-standing on-again, off-again relationship with mumble-core, a term so overused, maligned and mangled it ceases to have meaning in 2017. Beyond the categorization, though, Katz has spun humanist tales in which normal people talk, fight, love, forget and do it all again the next day. (See: “Cold Weather,” “Land Ho!”).

But until “Gemini,” Katz’s filmography has lacked a certain spunk and tenacity. He’s always known where to put the camera, how to guide a story from point A to point B, how to direct actors. Minimalism was his default.

“Gemini” strives to be something different — something more ambitious, more potent. The results vary, as will your mileage. But the thing to remember about swinging and missing is that you still swung. Katz is putting himself in the game, and more often than not, he connects.