There have been countless series created by grown adults about teenagers over the years, but has there ever been one created by a teenager and her dad? Daniel and Zelda Barnz, the father-daughter showrunners of HBO Max’s “Generation”, represent what must be a first for dramatic programming but their frank, probing look at the lives of a group of LGBTQ+ teens and allies definitely gets plenty of help from other departments to create its sun-bathed Orange County backdrop.

Among them are music supervisors Maggie Phillips and Andrew Brady, who have the near-Herculean task of creating the tuneful soundscape for its vastly different characters. “They reached out to us because they really liked our work on [the Hulu series] “Normal People” and Daniel was our point person [on the music] because that’s his passion and we were always geeking out at how it’s all at every kid’s fingertips these days unlike when we used to read liner notes or interviews with bands,” says Phillips. “But he ran everything by Zelda because he really wanted to stay true to her vision.” 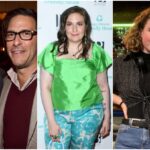 And the vision includes a mélange of songs, literally dozens audible throughout its 16 episodes (half of which aired earlier this year, the season finale airs July 8), and the approach was often rather wistful to create just the right mood. “We had fun thinking of how we listened to music when we were in high school,” says Brady, especially noting the circled-back use of a key song called “Cry” by Ashnikko and Grimes involving Riley (Chase Sui Wonders), a withdrawn budding photographer. “We wondered if we wanted to re-use the song, but when you’re that age, the love comes from listening to songs over and over again. We really wanted to capture that mood.”

But before any aging viewer can adopt a “get off my lawn” attitude about the modern inclusions, “Generation” also features several throwback bangers, including everyone from Sylvester to Salt-N-Pepa to the very-much-in-the-news Britney Spears, mostly centering around the lovelorn, quippy Chester (Justice Smith), who serves as the de facto center of this high school group’s universe. Says Brady: “The Sylvester song [“You Make Me Feel (Mighty Real)”] really connected with Chester’s story. We listened to a lot of modern LGBTQ pop, but we always had that one on a list, it just felt very joyful and timeless.” 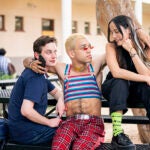 But the tunes are not just for the younger set in the series — in fact, one of the most poignant, revealing uses of music depicted is a semi-cringey karaoke version of Des’ree’s ubiquitous 1994 hit “You Gotta Be”, performed by the heavily conflicted mother (Martha Plimpton) of a pair of fraternal twins in the group, one of whom is gay-identifying. “Martha’s performance is really beautiful, and she said that was really challenging for her because they said she was originally singing too well,” says Phillips, acknowledging that Plimpton is, in addition to her prolific TV career, a Tony-nominated, sometimes musical theater actress who sings quite impressively. Adds Brady: “One thing I wish we got was the moment right after that scene ends since [her rendition] plays over the end credits. I wonder what that room was like.”

But sometimes the easiest method to identifying the musical palette was just to go straight to the sources you’re creating for. “I have two nieces that are identical twins,” says Phillips. “They just turned 18. And they would share with me the music they listen to, and it’s all over the place. But the common thread is it’s all very emotional and very heightened. And I think everyone [at that age] have these really intense emotions that they haven’t had before and they’re looking for a way to connect, and music is critical.”