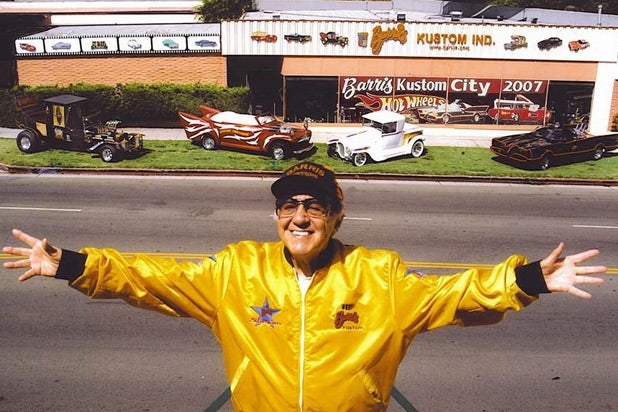 George Barris, customizer of iconic Hollywood cars for television shows and movies over four decades, died on Thursday in his Los Angeles home. He was 89 years old.

“Sorry to have to post that my father, legendary kustom car king George Barris, has moved to the bigger garage in the sky. He passed on peacefully in his sleep at 2:45 am,” his son Brett said in a private post on Facebook. “He lived his life they way he wanted til the end. He would want everyone to celebrate the passion he had for life and for what he created for all to enjoy.”

Barris is credited with designing iconic automobiles for television shows including the Munster Koach, the Green Hornet’s car, the jalopy from “The Beverly Hillbillies” and K.I.T.T. from “Knight Rider.”

But he’s arguably best known for creating the Batmobile from the 1960s “Batman” series, a car he adapted from a Futura concept acquired from the Ford Motor Company.

“If you’ll remember that pow, bang, wow is going out, throughout his whole script, that gives you an idea of what I had to contend with,” Barris said on NPR in 2010. “I said, well, if you’re going to make these exciting sounds and all this thing that comes up, I’m going to do the same thing to the car.”

Barris was born in Chicago in 1925, moving to Southern California after the death of his parents several years later. He and his brother began fixing up cars in their teen years, opening the Barris Brothers Custom Shop in Los Angeles in 1945.

After Barris formed the hobby club “Kustoms of America,” his work got noticed by Hollywood, with producers commissioning him a car for the movie “High School Confidential” in 1958. In the early-’60s, Barris opened the shop in North Hollywood out of which he worked until his death.

Barris made a public appearance as recently as September at an event in Van Nuys, California, to promote a book based on his work, “King of the Kustomizers: The Art of George Barris,” released on Sept. 1.