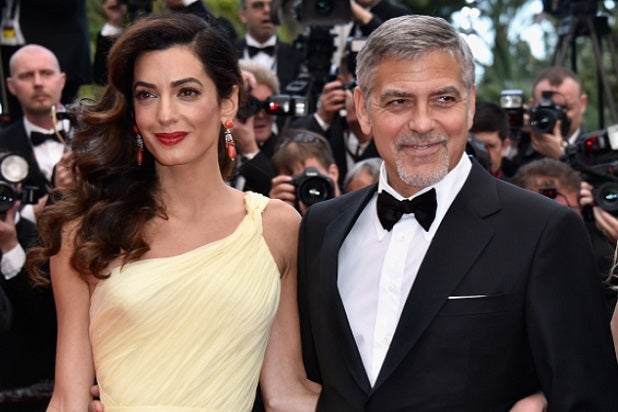 Oh, baby. There’s nothing like reports that George Clooney and his wife Amal are expecting twins to grease the internet’s sense of humor.

Julie Chen of CBS’s daytime offering “The Talk” announced Thursday that Amal is pregnant with twins. And while TheWrap typically doesn’t report on pregnancy news — because, let’s face it, fetuses aren’t typically known for their noteworthy actions — the reaction to the news from the internet has been remarkable.

One particularly choice parody played off of singer Beyonce’s recent announcement that she too is expecting twins. The Photoshopped offering pasted “ER” alum Clooney’s head onto the very pregnant photo of herself that Beyonce posted with her pregnancy announcement.

“When I heard #GeorgeClooney was ‘having twins,’ I totally assumed something else,” snarked ZTV Comedy News on Twitter, a reference to Clooney’s pre-marriage playboy reputation.

“#GeorgeClooney and his wife are expecting twin fetuses until June, when they magically turn into humans babies,” wrote one well-wisher, who has apparently mistaken the twins for rabbits, and Amal’s uterus for a top hat.

Not all of the funny reactions were limited to social media. Following Thursday’s news, People.com exploded with Clooney-related items, including the gem, “All the Places George & Amal’s Twins Can Expect to Visit With Their Jet-Setting Parents.”

Hopefully People.com is not also pregnant, because that kind of stretching and jumping just can’t be good for a fetus.

When I heard #GeorgeClooney was “having twins,” I totally assumed something else.

Congratulations.
#GeorgeClooney and his wife are expecting twin fetuses until June,
when they magically turn into humans babies.

Inside the best industry bashes of the week as Oscar nominations voting winds to a close on January 13, with the Party Report’s Mikey Glazer

The Clooneys hosted a screening of the Oscar shortlisted doc "The White Helmets" at the posh BVLGARI hotel in London on Monday night. Far from this Knightsbridge setting, the short follows first responders in Syria who risk their lives to pull victims from the rubble of airstrikes.