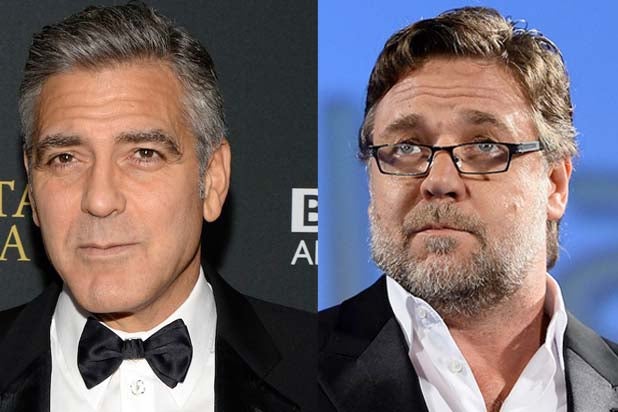 The “Monuments Men” director told Esquire during an interview published in the December issue that Crowe once sent him “a book of poems to apologize” after publicly insulting him.

“The truth is that [Crowe] did send me a book of poems to apologize for insulting the shit out of me, which he did. He picked a fight with me. He started it for no reason at all,” Clooney said of the feud that erupted prior to his Golden Globe win for “Syriana.”

“He put out this thing saying, ‘George Clooney, Harrison Ford, and Robert De Niro are sellouts.’ And I put out a statement saying, ‘He’s probably right. And I’m glad he told us, ’cause Bob and Harrison and I were also thinking about starting a band, which would also fall under the heading of bad use of celebrity.'”

“And that’s when he really went off on me. ‘Who the fuck does this guy think he is? He’s a Frank Sinatra wannabe.’ He really went after me,” Clooney continued. “And so I sent him a note going, ‘Dude, the only people who succeed when two famous people are fighting is People Magazine. What the fuck is wrong with you?'”

Clooney believes Crowe’s apology was issued in order to avoid awkward red carpet interactions during the 2005-2006 awards season, and considered reading Crowe’s poetry during his acceptance speech at the British Academy of Film and Television Arts Britannia Awards — if only he had won.

“So he sends me a disc of his music and a thing of his poetry. I think he said, ‘I was all misquoted,’ and I was like, ‘Yeah, yeah. Whatever,'” Clooney added. “I did take it with me to the BAFTAs, but I didn’t win. I might have used it if I had won. I was nominated for four!”

Public feuds between celebrities are increasingly more common thanks, in part, to the public’s easy-access to them through social media portals, like Twitter — a website Clooney does not approve of.

“If you’re famous, I don’t–for the life of me–I don’t understand why any famous person would ever be on Twitter,” Clooney said. “Because first of all, the worst thing you can do is make yourself more available, right? Because you’re going to be available to everybody.”

For the prolific 52-year-old actor and director, Twitter makes it entirely too easy to create a publicity nightmare.

“But also Twitter. So one drunken night, you come home and you’ve had two too many drinks and you’re watching TV and somebody pisses you off, and you go ‘Ehhhhh‘ and fight back,” Clooney said. “And you go to sleep, and you wake up in the morning and your career is over. Or you’re an asshole. Or all the things you might think in the quiet of your drunken evening are suddenly blasted around the entire world before you wake up.”

While he pointed out Brad Pitt and Bill Murray, in particular, as those he respected for resisting the allure of Twitter, he identified Ashton Kutcher as a celebrity who, perhaps, should part ways with his social media accounts.

“I mean, when you see, like, Ashton Kutcher coming out going, you know, ‘Everybody leave Joe Paterno alone,’ or whatever he said,” Clooney said. “You just go, ‘Fifteen minutes longer and a thought process and probably you wouldn’t have done that.'”