George Conway said on Friday that former President Donald Trump’s White House aides — including Conway’s wife, Kellyanne Conway — “didn’t push back” on him when they should have.

Appearing on CNN, the conservative lawyer scoffed after host Brianna Keilar read a book excerpt claiming that former secretary of state Mike Pompeo fretted that “the crazies [had] taken over” after Trump began baselessly claiming voter fraud in the wake of the 2020 election, which he lost to President Joe Biden.

“That’s really nice that he thought that and that he said that privately,” Conway said sarcastically. He went on, “Why didn’t he go — come here, go on to Fox — and say that? Why? We’re all hearing it now: ‘Oh, the crazies were there. There was nobody there to push back; it’s terrible. It’s Rudy Giuliani’s fault.’ Well, you could have said something at the time. All these folks, they didn’t, and that’s the most outrageous thing about it. They knew better.” 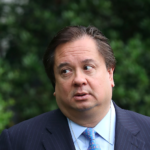 He excoriated top aides and cabinet members for not speaking publicly as Trump cast doubt on the election, among other things. Conway’s wife, of course, was a top advisor to Trump in the final stretch of the former president’s 2016 campaign and all throughout his time in the White House.

“Nothing was ever enough for Donald Trump and the reason why it got so out of hand was people didn’t push back at the interim steps,” Conway fumed. “They acceded to some of his desires and wishes in certain ways.”

Watch a clip of the interview above, via CNN.