George Jung, the cocaine smuggler portrayed by Johnny Depp in “Blow,” died on Wednesday at the age of 78.

“R.I.P. #georgejung Passed away this morning in his hometown of #weymouth #massachusetts,” a post on Jung’s Instagram read. A quote posted to his Twitter account read, “May the wind always be at your back and the sun upon your face, and the winds of destiny carry you aloft to dance with the stars.”

According to TMZ, Jung’s cause of death is unknown, though he recently experienced liver and kidney failure. He had been in home hospice care since the weekend, the outlet reported. 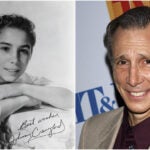 Jung was famous for being part of the Medellin Cartel and helping Pablo Escobar smuggle cocaine into the United States. According to Business Insider, at its peak in the ’80s, Escobar’s cartel was responsible for distributing 80% of the world’s cocaine for a weekly profit of $420 million.

Jung served 20 years in prison and was released in 2014, but landed back in prison two years later after violating his parole.

Jung, also known as “Boston George,” was the subject of the book “Blow: How a Small-Town Boy Made $100 Million with the Medellin Cocaine Cartel and Lost It All.” He was also famously portrayed by Depp in 2001’s “Blow,” which also starred Penelope Cruz.