“Cobra Kai” breakout Xolo Maridueña is set to star in the lead role of Jaime Reyes. Lopez is playing the role of Uncle Rudy, Barraza is playing Nana, Carrillo is playing Rocio and Alcázar is playing Alberto. The four round out the rest of the Reyes family which includes Bellisa Escobedo who plays Milagro. 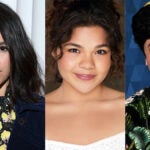 They join a cast that includes Brazilian actress Bruna Marquezine and Harvey Guillén.

The intent was always to cast the multigenerational Reyes family authentically Mexican and Mexican-American, according to director Angel Manuel Soto.

Soto added: “And then you have somebody on the younger side, the new blood that’s coming in, like Belissa and Xolo, they’re Mexican American, and tying them with the guys that came before which have a strong history of being born in Mexico and then coming over to the US. Being able to provide a Mexican family, a brown Mexican family, that embraces that level of authenticity, I think this cast allowed us to have all of that.”

Lopez is best known for his “George Lopez” sitcom which ran on ABC from 2002-2007, and for his standup specials including “We’ll Do It for Half” at Netflix.

Barraza was the third Mexican actress to be nominated for an Academy Award, in a year when ten fellow Mexicans were nominated at the 79th Academy Awards. Her two most recognizable films are “Amores Perros” and “Babel“; the latter garnered her nominations for an Academy Award and a Golden Globe Award. Her recent film credits include Robert Rodriguez’s “We Can Be Heroes,” Paramount Picture’s “Dora the Explorer”, “Rambo V” opposite Sylvester Stallone and the independent film “Monica” opposite Patricia Clarkson, which will premiere at the 2022 Venice Film Festival.

Carrillo is best known for her lead role in the iconic action film, the original “Predator,” and she also just finished a 3 season recurring on “Mayans” and still continues to recur on “Euphoria.” She was also nominated for an Independent Spirit Award as best female lead in the film Oliver Stone directed “Salvador.” Other credits include “Bread and Roses,” “Nine Lives” “Mi Familia” and “Seven Pounds.”

Alcázar is best known for portraying Colombian drug lord Gilberto Rodríguez Orejuela in the Netflix series “Narcos,” and for playing Lord Sopespian in “The Chronicles of Narnia: Prince Caspian.”