When Lorde dropped her new song-of-the-summer hopeful “Solar Power” two weeks ago, a lot of people noticed the fact that it has some similarities to George Michael’s classic “Freedom ’90” from his 1990 album “Listen Without Prejudice Vol. 1.”

But if you think there might be any bad feelings from the people in charge of Michael’s legacy — he sadly died on Christmas Day 2016 because the universe is terrible — think again. Last week, Michael’s estate settled the matter once and for all with a ringing endorsement of Lorde’s new single.

“We are aware that many people are making a connection between ‘Freedom ’90’ by George Michael and ‘Solar Power’ by @lorde which George would have been flattered to hear, so on behalf of one great artist to another, we wish her every success with the single,” Michael’s estate said in a statement released on June 18. 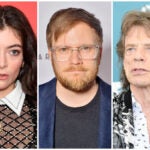 Also Read:
Fall Out Boy, Mick Jagger, Lorde and 54 Other Artists Demand Candidates Get ‘Consent’ Before Using Songs in Campaigns

The similarities might be entirely accidental, by the way. Lorde initially thought the song sounded similar to Robbie Williams’ 2000 banger “Rock DJ,” until her co-songwriter noted its similarities to Scottish band Primal Scream’s groundbreaking 1990 song “Loaded.” Lorde called them to clear it and lucky for her, Primal Scream lead singer Bobby Gillespie also gave “Solar Power” his seal of approval.

Here’s “Loaded,” and if you’re curious the sample is from a 1966 Peter Fonda movie called “The Wild Angels”:

Here’s “Rock DJ,” which by the way still kicks ass:

And for what it’s worth, I also think “Solar Power” sounds a lot like The Beta Band’s “Dry the Rain,” which is as good an excuse as any to post that clip too.