Former president George W. Bush didn’t vote for fellow Republican Donald Trump in the 2020 election. He didn’t vote for now-President Joe Biden, either. According to him, he wrote in his own former secretary of state, Condoleezza Rice.

“She knows it,” he told People in a recent interview to promote his new book of immigrants’ portraits, “Out of Many, One.”

Rice, he added, expressed no interest in taking on his old job when he told her what he’d done. 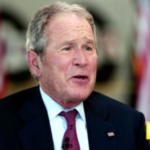 “But she told me she would refuse to accept the office.”

The 43rd president has been clear for years about his position on criticizing predecessors: He doesn’t like to do it. As a result, he rarely said anything negative about former president Barack Obama, the Democrat elected to replace him in what was seen as a referendum on his own administration. Throughout Trump’s single term in office, Bush occasionally offered mild critique of his immigration policy and oppositional view of the media.

Back in 2008 when Trump was a real estate mogul and reality TV star, but not a politician, he said that it would have been a “wonderful thing” if House Speaker Nancy Pelosi had tried to impeach Bush during his administration.

“Well, he lied. He got us into the war with lies, and I mean, look at the trouble Bill Clinton got into with something that was totally unimportant and they tried to impeach him, which was nonsense. And yet Bush got us into this horrible war with lies. By lying. By saying they had weapons of mass destruction. By saying all sorts of things that turned out not to be true,” said Trump at the time.

There was also some controversy over who Bush and his wife Laura voted for back in 2016, as well.