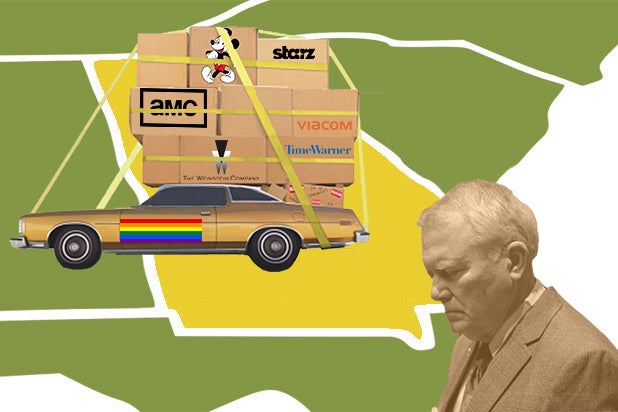 There has been a lot of talk this week about Georgia’s Free Exercise Protection Act bill, especially now that Hollywood is heavily involved in opposition. But what exactly is House Bill 757, and what would it do? TheWrap is here to explain.

First, some background: Last week, the Georgia Assembly overwhelmingly passed the legislation, which would allow certain organizations to refuse to provide services “that violate such faith-based organizations sincerely held religious belief.” The bill is currently sitting on Gov. Nathan Deal’s desk, waiting for either a signature or a veto from the Republican.

Here’s the summary directly from the Georgia General Assembly:

The key takeaways: Religious officials don’t have to perform same-sex marriages, and faith-based business don’t have to provide services if those services would infringe upon the owners’ “religious freedoms.” Even not hiring “certain persons” would be covered for those companies. Plus, landlords with enough faith don’t even have to rent to gay tenants.

The bill also explains that all individuals don’t even have to “attend” a wedding if it infringes upon their personal values. And people can’t even sue in civil court if someone uses the law to make an exclusionary decision.

Here’s what else the bill would do, practically speaking. It would risk about a billion dollars of annual entertainment production spending in Georgia. A laundry list of prominent media companies and individual Hollywood heavy-hitters have bashed the bill and implored Deal to use the “Veto” stamp.

Three biggies — Disney, the Weinstein Company and Netflix — all said they’d pull their local shoots from the Peach State should Deal sign this into law. The NFL added that it won’t host a Super Bowl there. A whole slew more would be highly disappointed and possibly reevaluate their relationship with the sometimes-called “Hollywood South.”

Per our most-recent numbers, Georgia grants about $170 million annually in tax benefits to entice Hollywood to travel east. That’s a lot of money, but it’s chump change compared to the boost that TV and film production gives to the local economy and jobs.