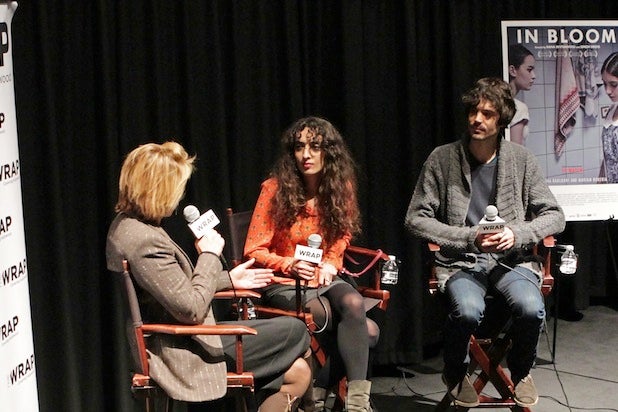 There’s no mistaking the Georgia on view in the film “In Bloom” for the idyllic one Ray Charles sings about. The country of Georgia — an independent nation of just 4.7 million — has submitted to the Oscars a fairly bleak portrait of a low point for the nation that followed the Soviet occupation and preceded any real reform, as the economic and political ennui affected … pubescent girls.

That was personal for screenwriter Nana Ekvtimishvili, who, with her co-director, Simon Gross, sat for a Q&A with Wrap editor/publisher Sharon Waxman after a screening Monday night at the Landmark. Like her two leading characters, Ekytimishvili was 14 in 1992, when the story is set, coming of age at a time in Georgia’s history when usual teenage concerns like boys, smoking in the girls’ room, and nasty schoolteachers were offset by adult matters like breadlines, intermittent electricity, and civil war.

“Everything in the film is somehow related to my life at the time or my family or friends,” said Ekvtimishvili, in introducing TheWrap’s screening. “It was very difficult time for Georgia, but we were trying to live our normal teenage lives at the same time. Sometimes we had to make some difficult decisions, and the film is about that.”

Sometimes the decisions were made for the girls of the time (potential spoiler ahead.)

Although in many ways the country’s customs seem thoroughly Western, Georgia had a long tradition of “bride-nappings,” a fate that almost casually befalls one of the two 14-year-old leads, who finds herself in a forced marriage after being kidnapped from a breadline by a suitor she’d turned down. Many of the audience questions in the post-screening Q&A focused on just how customary this was in Georgia.

“At the time, no one was thinking something unusual was happening or about women’s rights,” Ekvtimishvili said. “Now people have started to realize it was not normal and they didn’t have a normal childhood,” largely as a result of the post-Soviet openness that had young women going to other countries for college — just as she went to film school in Berlin, where she met Gross, her directing partner.

“This may be one of the first films which takes the (bride napping) topic seriously,” said Gross, a German national. “We know from other films that at that time it was treated comedically, and had this romantic touch.” Added Ekvtimishvili, “In ’50s and ’60s Georgian cinema, kidnapping stories were very romanticized, and so funny, and never shown from the point of view of the women and what they think about it.”

The Georgia of “In Bloom” is in flux as much as its pubescent leads. The locals have little reason to be happy about newfound independence from the Soviet Union, as strict controls have given way to further political corruption and a lack of food and power.

“‘Til this moment, we had quite a normal life under communism,” said Ekvtimishvili. “At least we had something to eat.”

Raging hormones and empty stomachs made for a less-than-ideal coming of age. Only last year, Gross pointed out, did Georgia enjoy its first honest, non-revolutionary change of government; thankfully, the bride-napping tradition died out, at least in the city, a few years sooner than the rampant corruption did.

Another thing that went away with the exit of the Soviets in the early ’90s, besides food: a tradition of cinema.

“Georgia has a very big film history, with great movies especially in the ’70s,” said Ekvtimishvili. “But after the Soviet occupation, our film industry hasn’t been working properly for 20  years. But now it’s getting better. We have two funds with very little money, but with my generation, they are very motivated and they want to make films.”

Added Gross, “It’s a very interesting time for cinema in Georgia because there are so many stories that haven’t been told for the last 20 years.”

Even if, as he noted, the largely agrarian nation only has a grand total of three movie theaters.