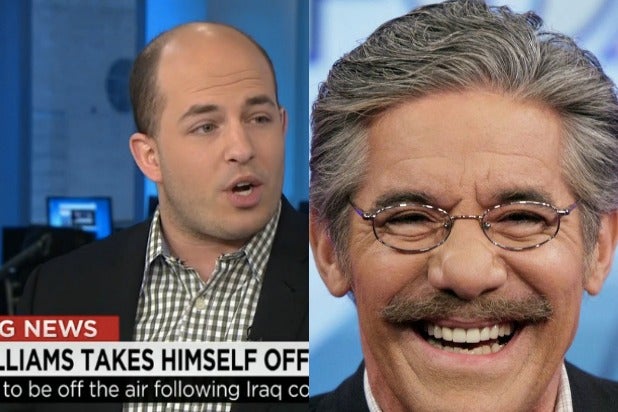 In a tweet, Rivera slammed what he regards Stelter’s obsession with Brian Williams.

We love @JamieStelter NY1 but why is her pacifist husband @brianstelter obsessing re @BrianWilliams? Did little Brian ever put self at risk?

To break it down: Jamie Stelter is a NY1 traffic reporter who’s married to the CNN anchor.

Rivera has been one of the few media figures to speak out in defense of Williams:

“I don’t want people to pile on and destroy a man’s entire career over this one incident,” Rivera said Friday on “Fox & Friends,” adding Twitter critics “attacking Williams from the safety of their mother’s basement” should “shut up.”

For Stelter’s part, he and CNN have covered the Williams Iraq helicopter controversy at length since it broke Wednesday; Stelter dedicated three quarters of Sunday’s “Reliable Sources” to the subject, exclusively interviewing the pilot who flew the downed helicopter Williams falsely claimed to be aboard, as well as the pilot of the chopper Williams actually rode that wasn’t hit.

And Monday, Stelter wrote a piece for CNN.com questioning whether Williams can return.

“Fundamentally the network now faces a wretched business calculation: Is Williams — the No. 1 news anchor in the United States — too damaged to continue in the job? And are NBC’s ratings and profits better off with him or without him?”

Multiple times on CNN, Stelter has acknowledged that Williams was one of his idols growing up. On Monday, CNN covered the story with the headline “Can Williams Recover From Scandal?”

Rivera’s take that Stelter is obsessed with the story is curious being that the entire broadcast, digital and social media spectrum is covering the story at length.