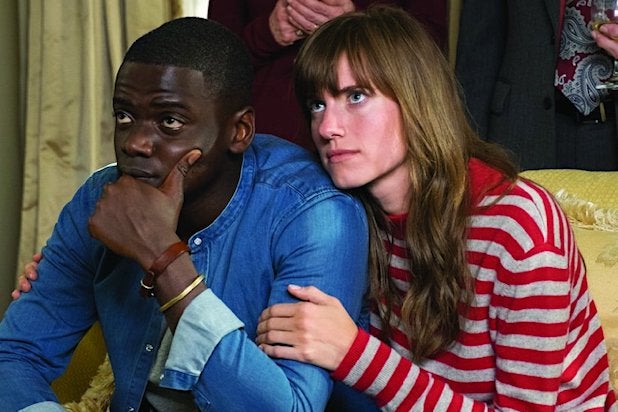 Jordan Peele’s directorial debut, the scary movie “Get Out,” is still getting synonymous raves among critics.

After TheWrap noticed it had a rare perfect 100 percent score among 27 critics on Rotten Tomatoes on Tuesday, more reviews have been filed and — guess what — it still has a perfect hundy, now that 34 critics have weighed in.

The film by the co-creator of Comedy Central’s popular sketch comedy show “Key & Peele” is about an interracial couple, played by Daniel Kaluuya and Allison Williams (pictured above), who go to meet the parents in what turns into an eerie, Stepford-esque motif. The R-rated horror movie gets downright frightening once they discover that black people in the neighborhood tend to go missing.

Critics are rapturous with praise for the film’s sharp wit and scares, many calling Peele’s first film a crowd pleaser with political bite.

Here are 10 reasons reviewers are saying “Get Out,” in theaters this weekend, is a can’t-miss movie:

3. “Get Out” unleashes Peele’s “uproarious humor along with his political fury,” says Richard Brody of the New Yorker.
Given his “perfectly tuned cast and deft camera work,” Brodys writes, “with his first film, he’s already an American Buñuel.”

Also Read: Can 'Get Out' Scare 'Lego Batman' Off the Top Box Office Spot?

5. It’s a “genre hybrid” that will send Peele’s career into orbit, argues Brian Tallerico of RogerEbert.com.
“‘Get Out’ feels fresh and sharp in a way that studio horror movies almost never do,” writes Tallerico. “It is both unsettling and hysterical, often in the same moment, and it is totally unafraid to call people on their racist bullsh–.”

6. It’s “the most trenchant studio release in years,” writes Alan Scherstuhl of the Village Voice.
“[It’s] a slow-building, often hilarious horror thriller built upon a dead-serious idea: that a black man walking alone through white suburbs is in as much danger as any slasher-flick teenager.”

7. “Get Out” is an “unmitigated triumph of the form,” says Scott Mendelson of Forbes.
“It’s a primal campfire story born of very real and all-too-plausible fears, and it very much as its fingers on the pulse of our current insane zeitgeist,” he writes, adding, “You’ll love it.”

8. The film is an “insightful racial commentary” that “utilizes the sharp subtext that the horror genre provides,” says Matt Goldberg of Collider.
“The film functions like a punch in the mouth to every Obama voter that went to Trump,” he adds. “It’s a bucket of ice water, and it will give you chills.”

9. Peele proves himself to be “an assured filmmaker with a most promising career ahead,” says Kevin Lally of Film Journal International.

10. It “feels more relevant than ever in our current political climate,” writes Jonathan Hatfull of Sci Fi Now.
“It shows us a point of view that we too rarely see in horror cinema,” he adds.