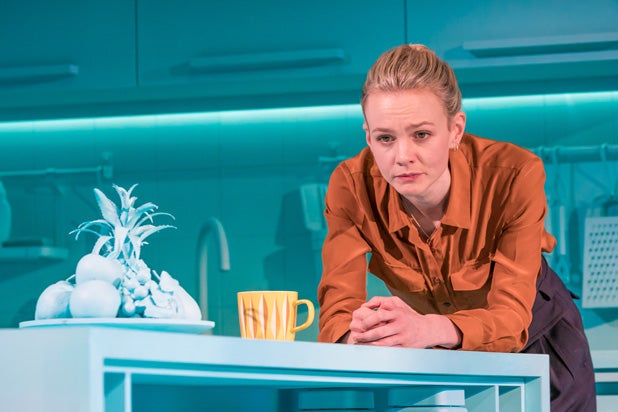 Carey Mulligan stands in a pale blue box to deliver her first of many long monologues in Dennis Kelly’s play “Girls & Boys,” which opened Wednesday at Off Broadway’s Minetta Lane Theatre. With her elegant build and gazelle neck, she’s reminiscent of a young Audrey Hepburn, if not for the fact that she shows absolutely no desire to charm us. Her unnamed character, identified in the program as Woman, is on edge but fully under control as she takes on a variety of easy targets: executive assistants, Paris, female models, Italians who don’t believe in queues.

Mulligan, and by extension her audience, is not stuck in that blue box for long, fortunately. Es Devlin’s set opens to expose a kitchen/living room, everything bathed in that same pale blue; here and there, a book or a piece of fruit shines in full color. The woman is playing with her young daughter and her even younger son. We don’t see the two children, but Mulligan speaks to them and convincingly mimes holding and horsing around with them.

Under Lyndsey Turner’s steady direction, the remainder of “Girls & Boys” alternates between these two sets as more objects in the kitchen area and living room begin to take on more color. (Oliver Fenwick’s lighting and Luke Halls’ video design are visual wonders.)

What the woman has to say in her blue-box monologues isn’t very scintillating or clever, which may lead you to wonder if the children, whom we never see, are real or imaginary. An upstage door does open and shut when we’re told the little girl is going to her bedroom. This macabre wonderment on our part makes the monologues easier to endure. The other thing that piques interest is how much the woman prefers her daughter to her son.

And it’s no surprise. The son has destroyed a piece of art the daughter created. When it comes to play time, the daughter imagines herself an architect. The son wants to drop nuclear bombs on her imaginary buildings. Obviously, the son is also a narcissist. When it’s nap time, he imitates a light switch and can’t be easily woken.

With the play’s title as an unsubtle clue, Kelly is telling us something about girls and boys, women and men. As for the latter, the woman’s husband turns out to be a monster from a slasher movie. He’s great sex in the beginning. The woman tells us that if you’ve never experienced this kind of phenomenal lovemaking, then take it from her: Drop your current partner immediately and go get laid. But then the husband’s career nose-dives just when the woman’s is taking off.

“Girls & Boys” is more absorbing in retrospect, after we’ve learned for sure whether the kids are real or if they ever existed. It’s a good thing that Kelly is a man, because “Girls & Boys” is one of the most anti-male plays out there. Kelly, to his credit, makes a good argument.

What’s most disturbing about “Girls & Boys” is that the play comes to New York from London’s Royal Court Theatre, as does the Public Theater’s just-opened production of “Cyprus Avenue.” Back to back, these two plays contain more mayhem, dramatized or spoken about, than any theatergoer needs to witness in one year, much less one week.