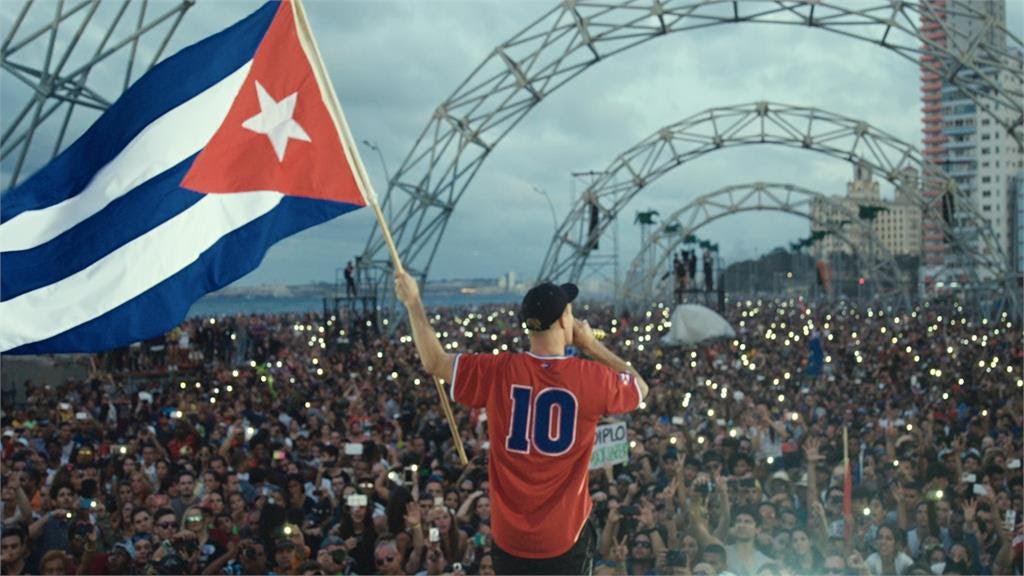 It’s no less true for being a cliché: art has the power to bring people together. And that power is at the center of the joyous “Give Me Future,” a film about electronic-dance wizards Major Lazer bringing their act to Havana, Cuba. What results is that rarest of creations: the feel-good documentary.

In following the EDM combo — Diplo, Walshy Fire and Jillionaire — to Cuba, director Austin Peters (“Haim Forever”) goes beyond the usual concert movie beats. Major Lazer’s 2016 live performance in downtown Havana is electrifying, to be sure. But “Give Me Future” — which premiered at the Sundance Film Festival in January — is just as interested in the logistics involved in putting on a show there, as well as in the culture and the people of the country itself.

For the three musicians behind Major Lazer, playing Cuba was a long-standing dream, one they had well before President Obama began reopening U.S. relations. With their roots in South Florida and the Caribbean, the group had already played everywhere else in the region. (This is the kind of combo whose world tours live up to the name; besides the usual stops, they hit places like Pakistan, Croatia and Ethiopia.)

Besides the expected bureaucratic hoops, the band also has to contend with the fact that Cuba has been isolated from much of the rest of the world, although it turns out you can still get your music heard in a country with a tightly-controlled state-run media. The film introduces us to “the paquete,” a hard drive created by one Cuban techno geek; every week, he fills a one-terabyte drive with the latest international movies, TV shows and music, and it’s copied and distributed throughout the country, in what’s probably the world’s most extensive non-online network.

“Give Me Future” shows us a Cuba we wouldn’t necessarily expect — when Diplo asks the sea of fans at the Major Lazer show to hold up their cellphones as the sun sets, seemingly everybody has one — although some aspects of a totalitarian country don’t change: A political rapper with a large national following bows out of performing at the last minute, lest he spontaneously say something that gets the whole concert shut down. (Major Lazer provides stage time for several Cuban acts, and the film introduces us to some of these musicians as well.)

Cuba’s cultural isolation perhaps comes through most vividly when Major Lazer plays a can’t-miss 1990s party jam, and the audience fails to respond because it’s a song they’ve never heard, even though it was a huge hit everywhere else in the world. Still, the Cuban promoters and musicians represented in the film are never portrayed as closed-off or provincial; they’re all striving to create no matter what their circumstances, and their thrill in performing is evident.

“Give Me Future” culminates, of course, with Major Lazer’s Havana show, and it’s an exuberant event; the audience (of hundreds of thousands, stretching out over several blocks and occupying every balcony within sight of the stage) explodes with enthusiasm, and Peters and cinematographer Deering Regan’s camera make that delight infectious. Even if you’re not a big fan of EDM, it’s hard not to respond to the chord it strikes with everyone who comes out for the show.

The buoyancy and electricity of “Give Me Future” will no doubt win Major Lazer new converts, but the film also offers hope that political and social gaps can always be bridged. Especially when there’s a good beat, and you can dance to it.