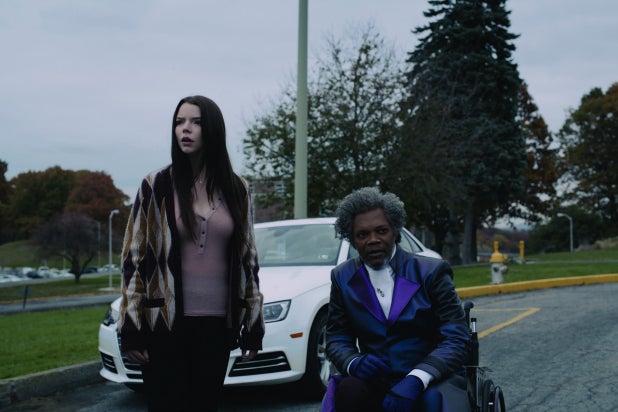 M. Night Shyamalan’s films tend to exist on the extremes; for many viewers, they are either very good or very bad, with almost no middle ground. After his breakout success with “The Sixth Sense” and “Unbreakable,” Shyamalan disappointed moviegoers with dud after dud, including “The Happening” and “The Last Airbender.” In the past few years, Shyamalan has made an extraordinary comeback with the one-two punch of “The Visit” and “Split.”

With “Glass,” Shyamalan closes a story loop that he started 19 years ago with the critically acclaimed “Unbreakable.” This new sequel finds that movie’s protagonist, David Dunn (Bruce Willis), taking up a side gig as a vigilante superhero with the help of his son Joseph (Spencer Treat Clark, TNT’s “Animal Kingdom”). Still using the ominous-looking green security guard poncho from his old job, Dunn decides the next villain to track down is the very troubled Kevin Wendell Crumb (James McAvoy), whose 24 personalities include a super-powered monster known as The Beast.

But in the middle of rescuing The Beast’s next potential victims, both superhumans are captured by a SWAT team and placed under the care of a poisonously calm therapist played by Sarah Paulson, who wants to cure them of their delusions of superhero grandeur. But David and Kevin are not her only patients — the two are shortly joined by another familiar face from “Unbreakable,” David’s archnemesis Elijah Price (Samuel L. Jackson), or as he calls himself, Mr. Glass.

When they first met in 2000, Elijah shared with David his theory that because someone like him is so weak — his bones are so brittle, they shatter “like glass” — that must mean someone else in the world must be so strong as to be his equal, like a riff on Newton’s Third Law of Physics. Both “Unbreakable” and “Split” are idiosyncratic works about our fascination with superheroes and their mythologies, yet “Glass” never feels like it becomes its own movie. It’s so heavily indebted to its predecessors that much of the emotional impact will be lost on anyone who hasn’t watched the other films.

There’s also a troubling development with Casey Cooke (Anya Taylor-Joy), the sole survivor of The Beast’s attack in “Split.” In that movie, she’s a conflicted character struggling with her own problems before she’s kidnapped with her friends by one of Kevin’s personalities. In “Glass,” her situation feels conveniently shelved, as she takes on a nurturing role for Kevin. It’s disturbing to see her reduced this way, especially when violence against women and the deadly assumption that women can fix dangerous men is still so prevalent. Also unexplored is any strife Elijah’s mother (Charlayne Woodard) might have felt after learning that her son is an evil genius-turned-terrorist.

The film’s three leads, at least, remain fascinating to watch. Willis’ gruff return to his character is less reflective than in his origin story, but his reluctant, aged alter ego makes for a nice counterbalance against the overwhelming energy in McAvoy’s performance. Even when sharing the screen with veterans like Willis and Jackson, McAvoy’s ability to quickly change accents, the pitch of his voice, facial expressions and posture for different characters works wonders in Shyamalan’s steady long shots. Although the movie is named after his character, Jackson really doesn’t shine until its final third. He’s delightful in a maniacally sinister way, a perfect conduit for Shyamalan’s signature plot twists.

Performances aside, “Glass” is a pretty mixed bag of exposition-filled dull moments and pedantic dialogue. Shyamalan, who also wrote the movie, unloads comic-book knowledge at the expense of character development, going so far as to explain what a “showdown” is and having a character give a brief history of the comics medium, which seems extraneous in a world where superhero movies have opened in theaters every summer for the past decade. That moment would have worked in 2000, but nowadays, any kid on an American playground has heard of the Avengers.

Despite its flaws, the movie has a fair share of entertaining scenes, usually the ones involving all three leads. However messy, Shyamalan still has a few tricks up his sleeve when tying the threads of these separate movies together. There are several references to the previous films, including Casey’s Philadelphia Zoo jacket from “Split” and the return of Clark and Woodard (and even Shyamalan) to reprise their “Unbreakable” roles almost 20 years later.

But the surprises aren’t limited to numerous references to the director’s previous work. The cinematography (by Mike Gioulakis, “It Follows”) feels much more cohesive than other parts of the movie. Our superhero and villains each have their own color reflected in their outfit, sidekick and homes. David’s presence, particularly in the fluorescent-lit office where he works with his son, is coded with the shades of green of his poncho. Carrying over the grimy yellow tones of “Split,” Kevin wears bright yellow pants and Casey’s outfit lightly mirrors his with mustard, grey, rust and brown tones. Elijah’s mom is easily recognized by a purple suit, which carries over to her living room. Purple, yellow and green make spectacular superhero colors, and Shyamalan and Gioulakis take full advantage of them.

If “Unbreakable” and “Split” are some of the strongest works in Shyamalan’s filmography, “Glass” holds a place somewhere in the middle between those and the titles that turned off so many moviegoers. But don’t count out Shyamalan just yet. There is enough experimentation — such as the stirring POV shots during the fight scenes — that shows a director still pushing his craft to bring his viewers something new. He’s not done surprising us.