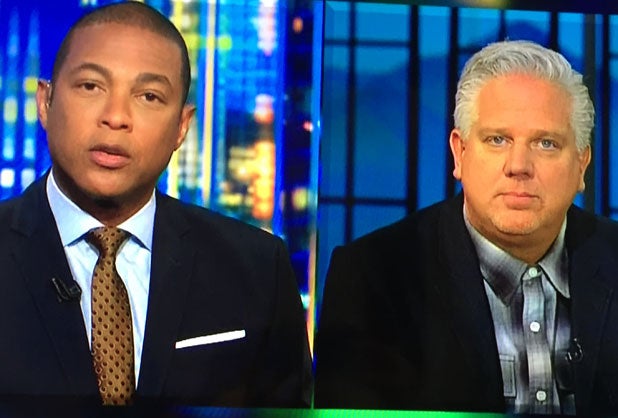 Don Lemon dropped the N-word once again Wednesday on “CNN Tonight.” But his guest, conservative political commentator Glenn Beck, told the CNN anchor he shouldn’t be saying it on broadcast television.

“I don’t think anyone should use it — I don’t think you should use it,” Beck said. “I wouldn’t feel comfortable using it. If I used it on my program — you just used it, as a journalist in context — I guarantee that tomorrow or tonight would be the last time I would be seen on broadcast television.”

Beck joined Lemon via satellite from Irving, Texas, for a conversation about the Confederate flag. But after a few minutes, the interview turned to the N-word. Lemon once again said it uncensored, as he referred to President Barack Obama using the word in an interview earlier in the week. But Beck disagreed with Lemon saying it on live TV.

Also Read: Why Don Lemon Is 'The Donald' of TV News-And Why CNN Should Give Him Anderson Cooper's Slot

“I think that is a bad word, my parents taught me that was a bad word,” the founder of TheBlaze said.

“I don’t like using that word, as a matter of fact I hate that word,” Lemon agreed, despite his recent repeated use of the word.

On Monday, the CNN anchor was torched on Twitter, and subsequently slammed by race experts, for saying the N-word repeatedly on air and holding up a sign with it spelled out.

Two days later, Lemon asked Beck if there’s a double standard when it comes to blacks and whites using it.

“It’s not just a double standard, because there’s so many words we’re now banning. I think that’s a bad word. I mean, I was raised to hear that word and say that it was bad long before political correctness,” Beck said, adding that he doesn’t even think it should be used in hip-hop music. “I don’t associate with people who use that word, I don’t understand why it’s used in rap lyrics.”

Lemon next touched on the topic of gay marriage. But his self-described libertarian guest said that he didn’t care how people live their lives: “I don’t want to be in your bedroom. Why is the government involved in this at all? That’s between you and your preacher or you and your desk lamp.”

When asked if he was homophobic, as has been previously reported, Beck quipped: “I don’t know. Are you attracted to me? Everybody both male and female are vomiting right now,” then said: “I have many homosexual friends, I have many people who work for me that are gay.”

The pair went on to discuss Caitlyn Jenner’s transition.

“I feel horrible that he has felt this way his whole life and lived with this secret his whole life,” Beck said, before Lemon gently reminded him that the transgender star should be referred to as “she.”

“I thought he said he didn’t mind either way,” Beck pondered quizzically.