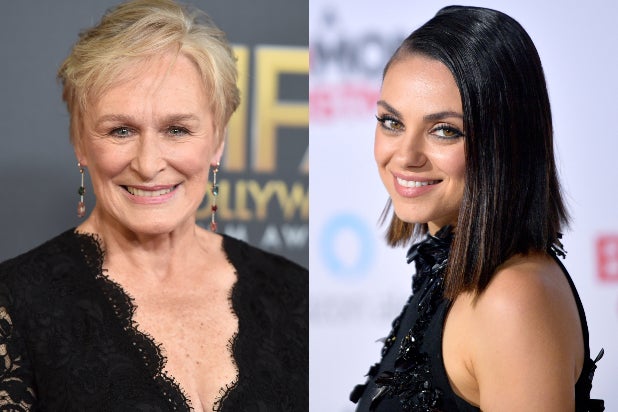 Glenn Close is teaming up again with her “Albert Nobbs” director Rodrigo Garcia for the drama “Four Good Days,” in which she and Mila Kunis will star as mother and daughter, an individual with knowledge of the project told TheWrap.

In the film, Close will play Deb, a mother helping her daughter Molly (Kunis) overcome a substance addiction by trying to nurse her through four good days that will be crucial to her road to recovery.

Capstone is launching sales on the film at the Cannes Film Festival, now underway.

Garcia will direct “Four Good Days” from a script he co-wrote with Eli Saslow, a Pulitzer Prize-winning journalist at the Washington Post who based the screenplay on his own article. Principal photography is expected to begin in September in Los Angeles, and Productivity Media and Oakhurst Entertainment are financing the project.

Garcia will also produce along with Jon and Jake Avnet for Indigenous Media, and Marina Grasic and Jai Khanna will produce for Oakhurst Entertainment. Productivity and Capstone will serve as executive producers.

Close is a seven-time Oscar nominee, most recently for her work on “The Wife” from 2018. She’ll next star in Ron Howard’s “Hillbilly Elegy” based on the best-selling novel. Kunis is taking a dramatic turn on the project, as she last starred in the action comedy “The Spy Who Dumped Me,” and she’ll next be seen in the crime film “Breaking News in Yuba County” from director Tate Taylor.