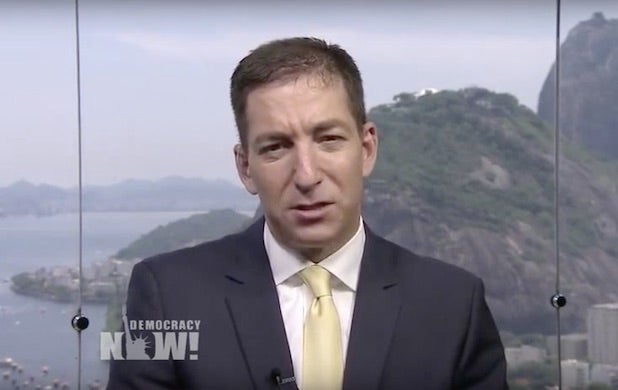 Glenn Greenwald took CNN to task on Thursday for two of its international anchors’ “despicable” interview with a Muslim guest who they seemed to blame, along with the rest of the Muslim community, for the Paris terror attacks.

“What is responsibility within the Muslim community to identify what is happening within its own ranks when it comes to people who are obviously training and preparing to carry out mass murder?” anchor John Vause had asked Yasser Louati, an activist against Islamophobia.

“Honestly that interview is so despicable that it almost leaves me speechless,” Greenwald told Democracy Now on Thursday.

“It’s still hard to believe that any human beings, let alone people calling themselves journalists, would say any of the horrific things they said.”

Greenwald criticized CNN anchors Vause and Isha Sesay for essentially blaming him for bearing responsibility for the Paris attacks simply being a Muslim.

Greenwald also took on the mainstream media’s “hunger for war,” which TheWrap reported on in the aftermath of the Paris attacks.

“The American media benefits immensely from war,” Greenwald said, pointing out that huge amounts of people watch CNN and MSNBC during war.

They get to go to war zones and dress up as soldiers, you know, with camouflage flaks, and they embed with the American media. It’s exciting for them. They win awards as part of their career. They feel nationalistic. They feel like they have purpose. Telling people that they’re part of a civilization war and fighting for freedom and democracy, that makes people feel really good, especially journalists. And so, journalists are hungry for war.