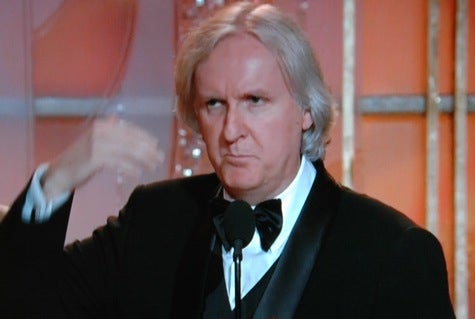 (Click here for TheWrap’s complete coverage of the Golden Globes)

The Globes voters also went mainstream in the acting categories by honoring the likes of Sandra Bullock, Meryl Streep and Robert Downey Jr.

“The Hurt Locker,” which had won most of the critics awards and took home the two top prizes at Friday night’sCritics Choice Awards, went home empty-handed. “Up in the Air,” the Jason Reitman film once considered an Oscar frontrunner, won a single award for screenplay. 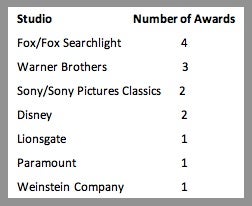 Bullock and Streep won best actress awards in the drama and comedy or musical categories for “The Blind Side” and “Julie & Julia,” respectively. Robert Downey Jr. won best actor for a comedy/musical for “Sherlock Holmes,” while Jeff Bridges took home the drama trophy for “Crazy Heart.”

The supporting awards went to the same two performers who’ve won virtually everything this season: Christoph Waltz for “Inglourious Basterds” and Mo’Nique for “Precious.”

Handed out by the HFPA, a group of about 80 journalists who contribute to foreign media outlets, the Golden Globes make up in visibility what they lack in critical respect. The results kept the hopes of many Oscar hopefuls alive, dealt small blows to a handful of contenders, and answered a few questions. 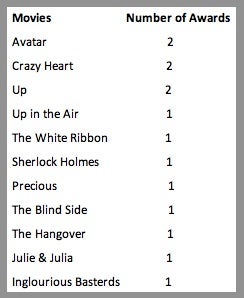 Who made the biggest gains?

“Avatar” was already a best-picture frontrunner, so its Best Drama and Best Director honors merely kept it on top. But Sandra Bullock’s win, coming on the heels of her tie with Streep at the Critics Choice Movie Awards, could actually make her Streep’s most serious Oscar competition.

Did any Oscar favorites slip?

“Nine” was probably the hardest hit.  In Globes voters, the Weinstein Company musical figured to find the most receptive audience it’d ever experience among awards voters – and its failure to win a single award is a serious blow to its being taken seriously as a contender from this point on.

“Up in the Air” did win a screenplay award, but it was considered a real rival to “Avatar,” and it could have used another big win or two to help push it back into the top rank of the awards race.

“The Hurt Locker,” on the other hand, has enough momentum from its slew of prior awards to weather being ignored by a group with little real credibility.

Did the Globe voters embarrass themselves by sucking up to stars?

Surprisingly, not very often.  Bullock beat the more-heralded Carey Mulligan "An Education"), which may well be 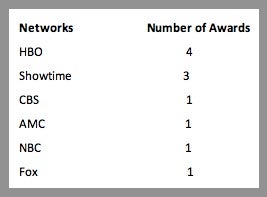 a case of star-power overwhelming the HFPA’s fondness for ingenues. But Bridges won over George Clooney, and the star-studded "Nine" fell flat.

In the best song category, where they had a chance to opt for U2 or Paul McCartney, the voters chose a song, "The Weary Kind," that came from lesser-known writers, Ryan Bingham and T Bone Burnett, but was far more integral to the film.

Very. After the third act of the show, 40 minutes in, the voiceover announcer went to commercial with the phrase, “Everyone’s wondering, will ‘Avatar’ win best drama? Next.” He was right, if by “next” he meant “12 acts and 135 minutes from now.”

After Act 5, he once again mentioned “Avatar” in the pre-commercial tease.  Clearly, the NBC and dick clark productions considered it crucial to keep throwing out the name of that movie.

And the winner is: Steve Carell.  Gervais led off his monologue with a joke about Carrell, the star of the American version of “The Office,” which led into an extended batch of gags about Gervais’ British original. 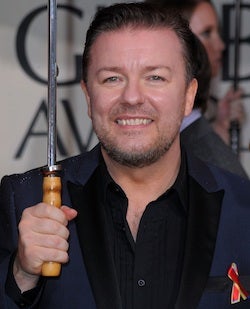 How did Gervais do?

Apart from an alcohol-related quip about Mel Gibson, he was probably less edgy and daring than advertised.

Then again, he did take a not-so-veiled swipe at the Hollywood Foreign Press: “One thing that can’t be bought is a Golden Globe. Officially.” With that line, he justified his hiring.

Who else had the best lines of the night?

One of the funniest lines came from Paul McCartney’s introduction to the animated feature category: "Animation is not just for children. It is also for adults who take drugs."

Worst lines of the night?

Most of them came in the press room — courtesy of the reporter who asked Julianna Margulies if, since she plays "a wife who gets even" on "The Good Wife," if she had any advice for Mrs. Tiger Woods; and the one who asked "Up" composer Michael Giacchino, "How come you’re so good?"

Margulies refused to answer.  ("I am not going there.")  And Giacchino was succinct: "That was an awful question."