But there was no dominant winner: No one film or TV show won more than two awards.

Wins for "Avatar" and Cameron lend more momentum to the 3D film’s Oscar campaign, which is taking on more serious fare in those categories — including "The Hurt Locker" and its director Kathryn Bigelow, Cameron’s ex-wife.

"I’m actually not prepared for this because frankly, I thought Kathryn was going to win this," Cameron said as he accepted the best-director trophy.

Robert Downey Jr., who won the best-actor award in comedy for "Sherlock Holmes," also thanked his wife — for nothing.

"First of all I’d like to thank Susan Downey, who told me that Matt Damon was going to win, so don’t bother preparing a speech," he said, kicking off a funny, tongue-in-cheek anti-thanks speech that nodded to "Holmes’" strong standing against the "Avatar" juggernaut.

"’Avatar’ was going to take us to the cleaners," he said. "If they didn’t have me, we wouldn’t have a show."

Sandra Bullock won best drama actress for her turn as a tough football mom in the surprise smash "The Blind Side." Her counterpart on the actor side was Jeff Bridges, who won for his role as a burned-out country singer in "Crazy Heart."

The summer hit "The Hangover" was awarded best comedy/musical film. Very much in its absurdist style, cameo star Mike Tyson joined the entourage of joiners onstage.

Meryl Streep also cooked up another chunk of awards hardware, taking home the best actress in a comedy/musical Golden Globe for her turn as Julia Child in "Julie & Julia."

“I just want to say that in my long career, I’ve played so many extraordinary women, that I’m getting mistaken for one," Streep said humbly. "I‘m a vessel for other people’s stories, and other people’s lives.”

The stars of "Dexter" killed it in the male TV acting categories, as Michael C. Hall — just a few days after he announced he’s battling cancer — and John Lithgow took best actor (TV drama) and supporting actor for their respective roles as psychopathic adversaries.

"Dexter" didn’t take best drama series, however: that honor went to "Mad Men," a sixth Golden Globe for the AMC series. The new Fox smash "Glee" was honored as the best comedy on TV, beating out perennial Emmy winner "30 Rock." 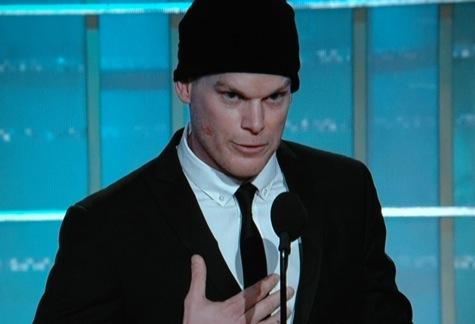 After the stars filed in from a rain-soaked red carpet, the first award of the night went to Mo’Nique for best supporting actress in "Precious."

"Lee Daniels, the world has finally had a chance to see how brilliant you are," she said. "You are a brilliant, fearless amazing director, and than you for trusting me with this role.”
Christoph Waltz took best supporting actress for his role as a Nazi in "Inglourious Basterds," the Weinstein film’s only win of the night.
Toni Collette won best actress in a TV comedy/musical for her multiple personalities on "The United States of Tara"; and "Up" won for best animated film.
Julianna Margulies won best actress/drama for "The Good Wife" — and made one of the night’s first references to the still-developing late-night crisis, thanking CBS for "believing in the 10 o’clock drama."
Hall, just days after announcing he was battling Hodgkins disease, took the podium to accept his award in a head scarf.
"It’s really a hell of a thing to go to work in a place where everybody gives a damn. That’s really the case with `Dexter,’" Hall said. "It’s a dream job. I’m so grateful."
Martin Scorsese was honored with the Cecil B. DeMille award, a moment that was commemorated with a long and entertaining montage of scenes from his most memorable films.
"It’s humbling to have my name attached to Cecil B. DeMille’s, the great showman," Scorsese said. "When you saw a DeMille picture, it stayed with you. And always within the spectacle was a strong story on a human scale."
Much of the talk leading up to the Globes centered on host Gervais, who in the days leading up to the show talked about how he didn’t rehearse (which a staffer confirmed he didn’t do) and how he planned to drink during the show.
His opening monologue was short and tart — not surprisingly, he took some jabs at the Hollywood establishment, and stoked his rivalry with Steve Carell. His presence was little felt, however, in a night of mostly ho-hum television.
His best line might have come deep into the show, when he was introducing Mel Gibson as a presenter.
"I like to drink as much as the next guy," Gervais said, "unless the next guy is Mel Gibson."
x
Looks like you're enjoying reading