The American Christian filmmaking industry currently runs on parallel tracks. Its success in the multiplex is represented by mainstream fare such as “Heaven is for Real” and “Miracles from Heaven,” yet it was jump-started by rough-hewn, cheaply made, independent releases such as “Fireproof,” and turned into a head-turning business concern by the box-office fire of “God’s Not Dead” and “War Room.”

Beyond the differences in production values and competency in execution, the two product streams represent a crucial contrast in tone. The films designed for a mass audience are quieter, more personal and less aggressive. They resist easy answers and, while assertively Christian, do not proselytize. The films made and seen primarily by Christian audiences, however, are much more likely to embrace the coded, often politically charged language of conservative Evangelicals. This is the world of the “God’s Not Dead” franchise.

That 2014 release reworked, to pointed effect, an urban legend centered on a Christian college student triumphing in a debate over the existence of God with an atheist philosophy professor. A decades-old story circulated around the internet, and, before that, in sermons and religious comic tracts from legendary publisher Jack T. Chick, its variations refresh themselves over time, yet have no basis in fact.

The sequel, though, attaches itself to a very real American political phenomenon, the upsurge in the number of states considering or passing religious liberty bills into law. Arkansas high school teacher Grace Wesley (Melissa Joan Hart, “Melissa & Joey”), in the course of a lesson about Dr. Martin Luther King Jr. and Gandhi, explains to students the Christian underpinnings of King’s philosophy of non-violence, and faces the loss of her job for doing so. Appropriate from a pedagogic standpoint, in a real classroom this statement of historical fact wouldn’t raise an eyebrow. Here, it becomes a referendum on the existence of God, and the public use of the name “Jesus.”

She engages the services of defense lawyer Tom Endler (Jesse Metcalfe, “Desperate Housewives”), while the prosecution (heavily implied to be from the American Civil Liberties Union) arrives in the form of character actor Ray Wise (“Twin Peaks”), a man whose face can turn demonic with the barest of smiles. 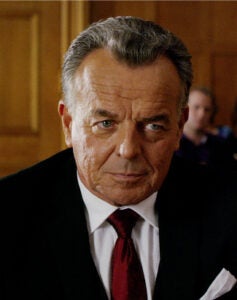 In a seemingly unrelated subplot — stay past the closing credits for an explanation — returning character Reverend Dave (producer David A. R. White, “Moms’ Night Out”) is subpoenaed and ordered to turn over copies of his recent sermons to local authorities. Naturally, he refuses, and since the film refuses to disclose any reasons for the subpoena, the audience is encouraged to assume that the widespread persecution of all Christians is at hand. In Arkansas.

A wild, barking dog of a movie, the first “God’s Not Dead” played both defense and offense, creating straw-man arguments, villainous non-believers, and the satisfying destruction of both. Returning director Harold Cronk, and screenwriting team Chuck Konzelman and Cary Solomon (“Do You Believe?”) have, this time around, chosen not to mess with success. Bolstered by more polished production values and a higher caliber cast of actors (Hart is an effectively sympathetic presence), the dialogue feels less like preaching and more like true conversation between actual human beings. The outcome may be as predictable as before, but its courtroom drama features at least as much tension as a reasonably well-made episode of television.

However, in spite of Cronk’s more assured filmmaking, “God’s Not Dead 2” remains, first and foremost, loyal to an unstated message that will trouble all but its target audience: that conservative Christianity should not be merely one voice in American cultural discourse, but that it should enjoy uncontested dominion.

Also Read: 'God's Not Dead' Isn't Going Away, and Neither Are Faith-Based Films

That’s no more or less a worthwhile premise than, say, deciding whether Batman or Superman should be the boss of all superheroes. But “God’s Not Dead 2” cannot be honest with itself or its audience about its intentions. It improves on its predecessor by grounding the plot in headline-making reality, but its disingenuous story lines do a disservice to real court cases that attempt to sort out the demarcation between personal faith and civic life in the United States. It pulls back from the original film’s cruelty and comeuppances for non-believers, yet its non-Christian characters are still parodies of human evil: greedy, bitter, violent, and out to prove that “God is dead.”

To beat back those fictional enemies, the film employs real life authors J. Warner Wallace and Lee Strobel, playing themselves as trial witnesses, and it’s with their arrival that the film comes closest to its own beating heart. Both men have written books on the subject of Christian apologetics, the branch of Evangelicalism that defends faith with rational, fact-based arguments, and they’re given screen time to state their respective cases for an “evidentially true” Christianity.

In any other courtroom drama, the presence of outsiders with no legitimate stake in a case would be considered irrelevant. But this is the court of Evangelical Law, and shoehorning in the authors’ respective testimonies returns “God’s Not Dead 2” to its win-at-all-cost roots. In the film’s world, an argument about power is at stake, and it’s an argument that must go on in perpetuity, a persecution-based war fantasy that must never cease to rage. Otherwise, its soldiers might be forced to find a truly worthwhile expression of faith on earth.

"Chronicles of Narnia": The CGI-filled fantasy franchise and religious allegory took in nearly $1.6 billion over three films.
View In Gallery
x
Looks like you're enjoying reading