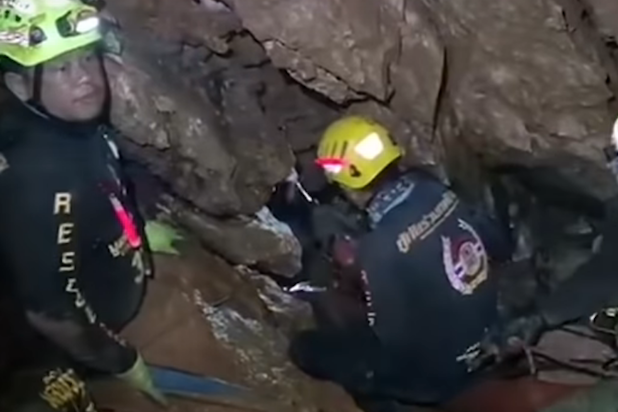 Michael Scott, PureFlix managing partner and producer of “God’s Not Dead,” is already on the ground in Thailand, working on turning the story of the Thai boys soccer team who were trapped in a cave for weeks into a major motion picture.

Scott was in Thailand, at the foothills of the Tham Luang mountain cave system near the Myanmar border where the boys were trapped, on Tuesday conducting interviews. He told the AAP newswire in Chiang Rai, “I see this as a major Hollywood film with A-list stars,” according to Australian outlet News.com.

Scott and his co-producer Adam Smith said they’re already planning to bring in a screenwriter to talk to key players from the team of foreign rescuers, Thai Navy SEALS, the victims and their families to seek exclusive rights to their stories.

“There’s going to be other production companies coming in so we have to act pretty quickly,” Scott said, when AAP asked whether he thought he was being insensitive.

Scott did not immediately return TheWrap’s request for comment.

For the last week, the world has been rapt as rescuers have attempted to pull the 12 boys and their coach from the cave, which had flooded due to monsoon rains that sealed them in.

Rescuers finally freed all 12 boys, with ages ranging 11 to 16, and their coach on Tuesday.

The team had been missing for a week, and when rescuers found them it was originally believed that they would have to stay in the caves until the end of monsoon season, which would last for several more months.

After the rains flooding the cave worsened, a team of 90 rescue divers — 40 Thai, 50 foreign — were sent in to extract them as soon as possible. One diver died in the initial attempt.

The rescue operation involved guiding the boys through a partially flooded cave system. Some sections of the cave required climbing equipment, and one that was flooded by stormwater was so narrow that the divers needed to remove their oxygen tanks in order to get through.

It’s a story packaged and ready for a big screen Hollywood adaptation.

Discovery has already has ordered a one-hour documentary special on the daring rescue titled “Operation Thai Cave Rescue,” which will debut Friday on Discovery Channel and air Saturday on Science Channel.