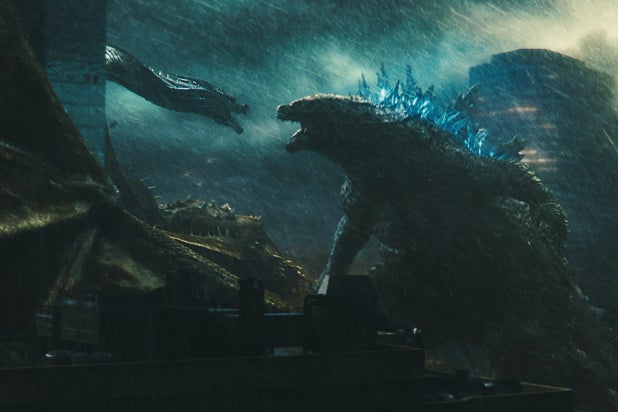 Hollywood finally gets kaiju big battles right in “Godzilla: King of the Monsters,” a film whose approach is part 21st-century action franchise (kick in the action early, then keep one-upping it until the big finale) and part 1970s Irwin Allen disaster saga (fill the cast with prestigious actors and give them just enough to do so they can elevate the goofy material).

Whereas 2014’s “Godzilla” made us wait too long for the monster-movie money shots – vamping instead with uninteresting human characters – this one offers a family story made all the more heartfelt thanks to committed performances by Millie Bobby Brown, Vera Farmiga and Kyle Chandler, not to mention a constant stream of the kind of rock-em-sock-em action that makes you want to see a film like this in the first place. And that action, unlike in “Pacific Rim,” isn’t constantly hidden by murk and rain and night and fog.

Finally, here’s an American monster movie that understands that one positive effect of CG technology is to give us giant monsters that don’t rely on wires, miniatures or zipper-backed suits, something that the Japanese figured out ages ago.

We open with the mysterious Monarch company continuing its research into the recently-surfaced giant monsters, or “titans,” as it calls them. Scientist Dr. Emma Russell (Farmiga) is in China, developing a doohickey that will take a monster’s language patterns and translate them into a dominant alpha signal. She’s finally gotten the thing to work on a larval Mothra when, wouldn’t you know it, a private army led by Jonah Alan (Charles Dance) shows up to steal the machine and kidnap Emma and her daughter Madison (Brown).

Monarch and the U.S. Army swing by a Colorado wolf reserve to pick up Emma’s estranged husband Mark (Chandler) to help them find his wife and daughter. The family broke apart when their son was killed during Godzilla’s San Francisco rampage in the earlier film, leading Emma to dig deeper into her research and Mark to pull away. But while all that’s unfolding, Jonah and his team head to Antarctica to unleash the three-headed Ghidorah, and his re-emergence on the planet brings other monsters out of hiding while challenging Godzilla’s supremacy.

Fans of the original 1954 Japanese “Gojira” (re-edited and released in the United States in 1956 as “Godzilla: King of the Monsters!”) will feel seen, not just by the title, but by the use of an “oxygen destroyer” (the old film’s secret weapon of choice) at one point and by the political underpinnings, a staple of the Japanese franchise from its origin to the recent “Shin Godzilla.” This is a big-budget movie that slips in messaging about biodiversity and waging war on the wrong targets, but never in a way that interrupts the excitement.

Director Michael Dougherty (who co-wrote with his “Krampus” collaborator, Zach Shields) assembles an impressive ensemble of returning actors (Ken Watanabe, Sally Hawkins) and new additions (Zhang Ziyi, Bradley Whitford, O’Shea Jackson Jr.) and finds a way for them to spout technobabble and look at green screens in a way that gives the film real heft, even as it manically hops around the globe from one hot-spot to another. When Watanabe’s Dr. Serizawa notes, “Sometimes, the only way to heal a wound is to make peace with the demon who caused it,” it lands with real meaning and underscores the film’s ideas about geopolitics. And whenever Brown is on screen, “Godzilla: King of the Monsters” does, for a moment, become a film about a family in crisis.

The effects team gives the film’s various creatures real heft and substance, and the battle scenes are edited by Roger Barton (“World War Z”), Richard Pearson (“Kong: Skull Island”) and Bob Ducsay (“Star Wars: The Last Jedi”) in a way that’s breathlessly exciting without ever being too choppy. Unlike other CG-fests, this “Godzilla” gives us a good look at these iconic monsters and shows us what they’re capable of in battle. (If you think the delicately-winged Mothra can’t hold its own against the deadly Ghidorah, think again.)

Yes, “Godzilla: King of the Monsters” is ultimately a Saturday matinee writ large, but that’s nothing to sneeze fire at; countless big, expensive action movies fail at making their way into a viewer’s pleasure center, but this one knows exactly how to be, in the truest sense of the word, sensational.