Julian Dennison in his young career has already acted in some mega franchises like “Deadpool 2,” “The Christmas Chronicles: Part 2” and now “Godzilla vs. Kong,” but he still hasn’t quite gotten used to the surreal experience of acting in something so heavy with CGI.

“It was the acting to nothing, having to act to absolutely like a brick wall,” the teenage star Dennison told TheWrap. “I was standing, and I’d be like, what am I doing with my life? I am talking to a tennis ball. It turned out really great, the CGI is amazing.”

Dennison gave a shout out to “Godzilla vs. Kong’s” visual effects team Weta Digital, which shares Dennison’s hometown in Wellington, New Zealand. But he admitted that in the early going that Godzilla, Kong and the other monsters he has to evade didn’t always look as impressive as they do on screen now.

“I remember them showing us photos of really rough CGI on set, and it was basically giant Lego monsters chasing after us,” he joked. 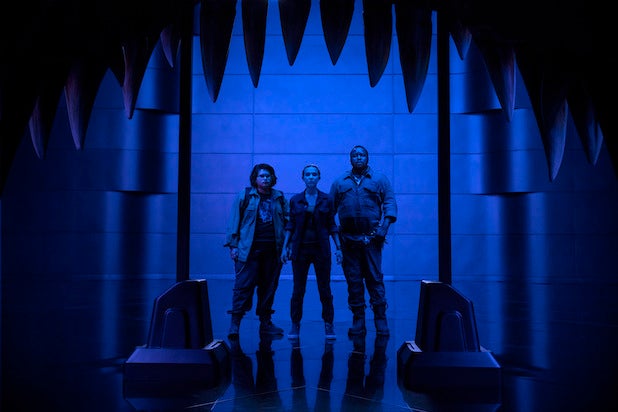 Though “Godzilla vs. Kong” is the latest in a long Monsterverse franchise to finally pit Godzilla and King Kong in an epic battle, Julian Dennison, who got his break in Taika Waititi’s “Hunt for the Wilderpeople,” is a newcomer to the films.

In this one he plays a nerdy friend to Millie Bobby Brown’s character as the two teens road trip across the country to find a podcaster and conspiracy theorist investigating the shadowy APEX Industries. And he along with Bobby Brown and Brian Tyree Henry as a result wind up spending a lot of time searching secret underground labs and swatting at winged, demon sprites.

But Dennison and Brown’s playful banter greatly lightens the mood of the film between the epic kaiju battles. He says prior to joining he had to have a chemistry meeting with Brown, whom he called “super down to earth and amazing.” And without spoiling the moment, Dennison is the one who gets to name drop another classic movie monster who finally makes his appearance in this film.

The movie has already had a monster opening overseas, grossing $123.1 million worldwide ahead of opening domestically and on HBO Max this past Wednesday. But Dennison says the real joy of watching “Godzilla vs. Kong” would be in a theater where it’s safe to do so, and he hopes people get the chance to experience it the way director Adam Wingard intended.

“If you can safely go back to a movie theater wherever you are, for sure watch it on a big screen. It’s such a sick movie and you’ll want to watch it on a big screen,” Dennison said. “I think people will be willing to if they can safely go back to the theaters. I miss going to the movies. I miss eating popcorn, drinking soda and watching movies with completely strangers. So if you can, for sure, you’ll want to leave the cinema with your ears bleeding.”