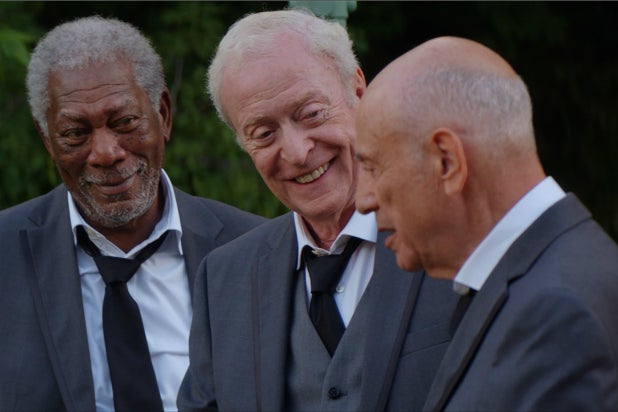 You’re not a hot demographic in Hollywood until you get your own heist movie: behold “Going in Style,” which puts three pensioners stiffed by a corporate merger through the paces of tired movie-caper mechanics and crime-pays shenanigans.

That the marquee geriatrics are Oscar winners Michael Caine, Morgan Freeman and Alan Arkin creates only a mild bulwark against the lukewarm cheese in director Zach Braff’s movie, because the three stars simply play the most well-known versions of their personae — the tough blue-collar gent (Caine), the warm father figure (Freeman), the quippy fatalist (Arkin). For a movie ostensibly about flipping the script on what old age means, the uninspired obviousness on display is dispiritingly ironic.

Of course, it wasn’t new to begin with, being a remake of the 1979 Martin Brest film that cast George Burns, Art Carney and Lee Strasberg as seniors in Groucho glasses sticking up a bank. Back then the gimmick was positioned as a switch-up to bring excitement into the trio’s dull lives, but in “Hidden Figures” screenwriter Theodore Melfi’s headline-conscious update, there’s an element of financial need.

In the first scene, Joe (Caine) is dealing with an officious bank representative (an overwrought Josh Pais) about a deviously tripled mortgage payment, when the place is robbed by masked gunmen. Seeing the brutally efficient job go down, and the culprits getting away with it, an idea begins in the back of Joe’s mind.

Retired steelworker Joe and his fellow retirees and Brooklyn neighbors Willie (Freeman) and Al (Arkin) live a simple existence, bracketed by breakfast at the local diner with the requisite sassy waitress (Siobhan Fallon Hogan), hanging out at the lodge with their fellow old-timers, and TV watching at night. (They’re shown being heavily invested in “The Bachelorette.”)

Joe walks his adoring teenage granddaughter (Joey King, “The Conjuring”) home from school every day, while Willie Skypes with his daughter and granddaughter and wishes they’d visit more. Al, once a jazz sideman, gives music lessons, and comically discourages the advances of Ann-Margret as the world’s most glamorous grocery store clerk.

But when their old employers get bought by a corporation, and the pension fund is frozen, the prospect of losing everything (including Willie’s show at a new kidney) makes Joe’s idea to rob a bank themselves all the more appealing. (Plus, it’d be the bank callously handling the steel company’s merger; how conveniently vengeance-inducing!) When a dry-run stab at shoplifting goes awry — literally and cinematically, because a scene with Caine trying to escape on a motorized shopping cart with Freeman riding in the basket has no reason for existing — Joe taps his ne’er-do-well ex-son-in-law Murphy (Peter Serafinowicz, “Spy”), who has contacts in the criminal world, for help.

Murphy puts Joe in touch with a professional thief (John Ortiz, “Kong: Skull Island”) who agrees to help these lawbreaking novices. Cue the requisite heist-planning montage of split-screens, blueprint animation, screen timers, and alibi details, scored to a thudding caper beat (from composer Rob Simonsen, “Gifted”) that becomes inescapable and telegraphs everything in the process. (Everyone, keep Steven Soderbergh from seeing this; he’ll just retire from movies all over again.)

This is when you realize that the ten-to-fifteen minutes of gentle character comedy that started “Going in Style” — and showcased well enough the charms of its leads — were the bait-and-switch tactic for a numbingly dumb heist flick with an ain’t-old-people-cute sheen. (They smoke pot and get the munchies! They look creaky doing yoga! They use landlines!) Jokes at the expense of the more doddering elderly fall in Christopher Lloyd’s lap as the gang’s lodge colleague Milton, but he’s mostly doing a Jim-from-“Taxi” retread, because the rulebook here is to recognize everything and be surprised by nothing. Only Kenan Thompson squeezes out a few solid chuckles as the perturbed store manager following the trio’s disastrous attempt at food theft.

The clichéd story wouldn’t even be an issue if the movie were enjoyable. But little works as humor or suspense or sentiment once the job is on, because you don’t believe the filmmakers care about their characters as people, or as anti-capitalist outlaws, or even embodiments of old age in all its wisdom, loneliness, fear, camaraderie and melancholic folly, the way the genuinely bittersweet original did. Here, everything is a signifier — a loved one, a mean bank, a snarling cop (Matt Dillon) — in the service of an adventure plot you’ve seen a thousand times before.