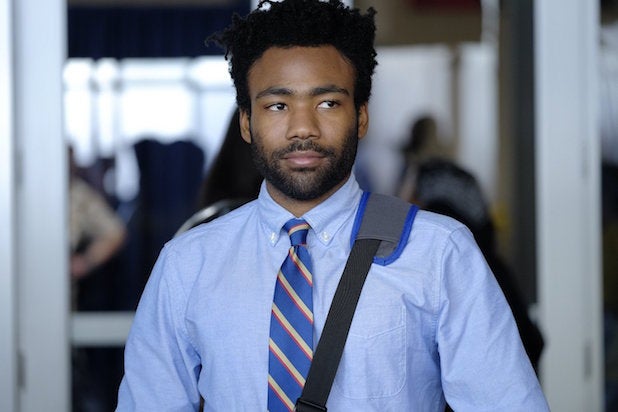 If this was a strange year for America — and most Americans might agree that 2016 ranged from whacked-out to dizzying to mortifying — then the nominations for the 2017 Golden Globes captured some of the vertigo.

The voters of the Hollywood Foreign Press Assn. honored several new series that dug into the head-spinning paradoxes of contemporary America, most notably “This Is Us,” NBC’s drama that looks at the lives of interconnected (and multicultural) families past and present. Donald Glover’s “Atlanta,” nominated in the best comedy/musical category, is a sly look at the complexities and contradictions of race, hip-hop and counterculture.

Then there are those series that use the past as a not-too-distant mirror. Best drama nominee “Stranger Things,” Netflix’s period thriller, reinvented 1980s Spielberg-esque wonder as something darker and more sinister. FX’s miniseries “The People v. O.J. Simpson” led the Globe’s TV pack with 5 nods overall and reanimated seemingly every detail of the 1990s Trial of the Century. It found it all just as maddening and tortuous as it was the first time around.

Of course, this being a Hollywood award show, Monday’s Globe nominations saw plenty of less adventurous nominees filling out the roster. Netflix’s “The Crown” — perhaps the most expensive TV series ever made — is a sumptuous, peek-inside-the-drawing-room look at the rise of Queen Elizabeth II. Fans who cherished the twilight-of-the-empire aura of “Downton Abbey” will feel right at home.

No knock on Julia Louis-Dreyfus and “Veep,” but HBO’s political satire has become an overly safe go-to for award-show voters. Globe voters’ ongoing fondness for Amazon’s classical-music dramedy “Mozart in the Jungle” — last year’s best comedy winner, nominated again this year — appears not to be contagious to the wider public.

And then there were the surprise nods, like Nick Nolte, of Epix’s little-seen political comedy “Graves,” in the best comedy actor category.

But the Globes, true to form, did a reasonably good job of staying focused on the new and the challenging, at least by series standards. For every “oh, of course” nominee, there was another welcome newcomer, such as the nod for Issa Rae, whose HBO comedy “Insecure” could grow into one of those definitive series that capture the early 21st century zeitgeist.

Speaking of that zeitgeist? That was probably best captured in 2016’s strangest show of all, one that came away with zero Globe nominations: The U.S. presidential election. But undoubtedly, that’s a story we will see retold in the years to come.