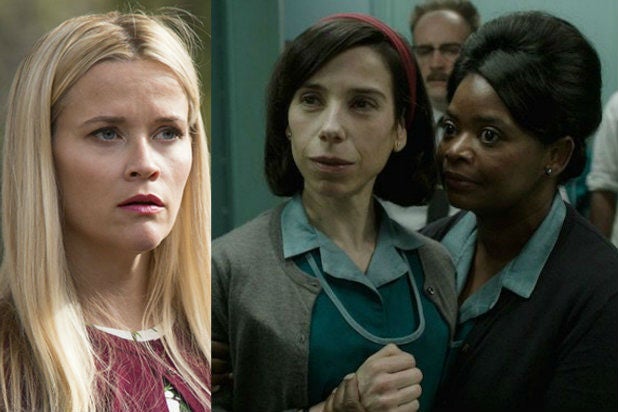 It’s a good day in Monterey.

The fictional, dysfunctional families of HBO’s “Big Little Lies” and the lovable oddballs of Guillermo del Toro’s “The Shape of Water” lead the nominees for the 2018 Golden Globe Awards.

Swimming dangerously close to the underwater love story is Steven Spielberg’s “The Post” and Martin McDonagh’s “Three Billboards Outside Ebbing, Missouri” with six nominations each. That includes Best Picture nods for both; Best Actor and Actress drama nominations for Meryl Streep and Tom Hanks of “The Post”; a Best Actress drama nom for “Three Billboards” firebrand Frances McDormand and a Best Supporting Actor nomination for her co-star Sam Rockwell.

Jessica Lange and Susan Sarandon were both nominated for Best Actress in a Limited Series or TV Movie, for their portrayals of Crawford and Davis, respectively. Alfred Molina scored a Best Actor in a Supporting Role in the same format for playing “What Ever Happened to Baby Jane?” director Robert Aldrich.

FX’s “Fargo,” NCB’s “This Is Us” and Hulu’s “The Handmaid’s Tale” trailed “Feud” with three nominations each.

Fox Searchlight, and its parent 20th Century Fox Film, emerged as the most-nominated film companies with 15 and 12 nominations each. Indie darling A24 trails them with 7 nominations, for films like “Lady Bird” and “The Disaster Artist.”

HBO racked up 12 nods to become the most-nominated TV network, with Netflix behind them at 9 total nominations.