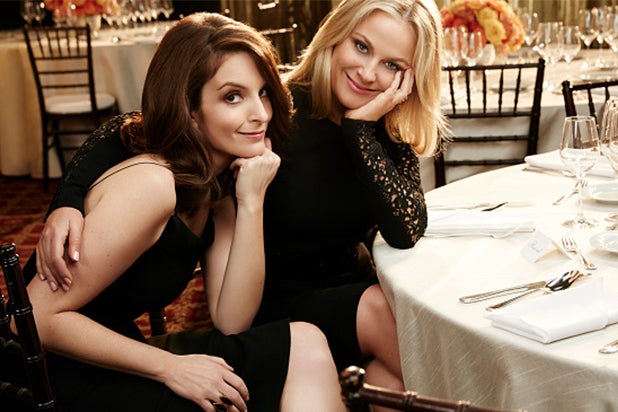 TheWrap spoke with show producer and Dick Clark Productions exec Barry Adelman to take some of the guess work out of the Tina Fey and Amy Poehler-hosted fete. Here’s what you can expect:

Mr. and Mrs. George  Clooney
George Clooney will receive the honorary Cecil B. DeMille award for outstanding contributions to the world of entertainment, but all eyes will be on his plus one.

Amy and Tina’s Going-Away Party?
Fey and Poehler will complete their  two-year hosting deal come Sunday, but given the universal approval of their approach to gig, can we really count them out?

“Amy and Tina can stay forever if they’d like,” Adelman joked. “Their material is coming together and we’ll see the first of it on Friday.”

We pressed for details over what the “Saturday Night Live” alums might cover in their opening bit and throughout the evening, say the Bill Cosby scandal or the crippling Sony Hack?

“We put no restrictions on Amy and Tina, so we don’t even know what to expect. Whatever they, it’ll be very funny,” Adelman said.

The Sweetest Hangover
Golden Globes is a party first and foremost. If it seems like there’s leftover energy from the top of the year, it’s not an accident.

“We just got in from New York on Tuesday, from New Year’s Rockin’ Eve, so we’re … jet lagged but excited. It’s a crazy time.” he said. That celebratory vibe translates into the broadcast this year in elaborate lighting and theme of “true Hollywood glamour. That’s what this show really is, it’s the hottest ticket in town.”

A Fabulous Dinner Party
“What’s amazing is, any single person in the room would be your number one guest at a dinner party, But we have a room full of them,” Adelman said. And the producer won’t play favorites.

“We have to present each of the films and all the shows equally so I never choose favorites,” he said. “I hope they all win.”