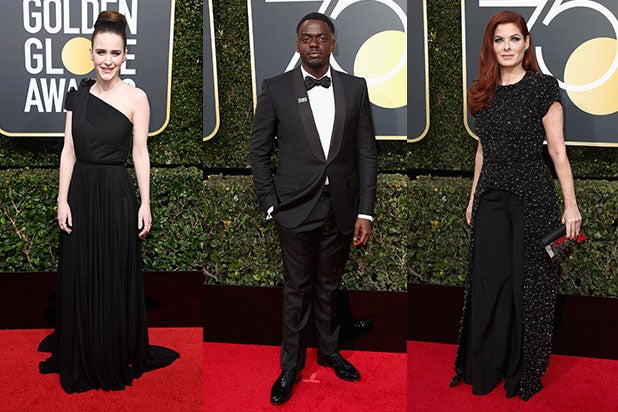 The Golden Globes are usually an event where attendees wear the crème de la crème of glitzy and glamorous colors, but this year stars, including Meryl Streep and Michelle Williams, chose to wear black.

How come Hollywood’s elite is choosing to don the darkest of shades, a color usually associated with mourning? In December, People reported that actresses at this year’s event will be wearing head-to-toe black to protest sexual assault, abuse and harassment in Hollywood, and to support those who have spoken out about these issues. This comes after heavyweights like Harvey Weinstein, Kevin Spacey, Dustin Hoffman, Louis C.K., Morgan Spurlock, and many more of have been accused of sexual misconduct.

Also Read: Why the Golden Globes Will Be the Most Important Awards Show in Years

On Dec. 22, celebrity stylist Ilaria Urbinati said on Instagram that men would be wearing black to the event — at least “all my guys,” who include Ryan Reynolds, Tom Hiddleston, Armie Hammer and Bradley Cooper. Later on in December, Dwayne “The Rock” Johnson confirmed that the men would be wearing black to support the women in the industry, and Seth Meyers, who is hosting the award show on Sunday confirmed he’s also wearing the shade.

Along with the black outfits, people were wearing pins created by Time’s Up, the coalition behind the statement of wearing all black. 300 women in the industry, including Reese Witherspoon, Gal Gadot and Shonda Rhimes, stood by the initiative. Kerry Washington told the Los Angeles Times that the alliance was discussing to boycott the Golden Globes but eventually decided against it to support the nominated peers. Then, the decision was made to wear all black.

“Wearing black is an opportunity to talk about all the other things that we’re doing,” Washington told the Times. “We’re saying that we are three-dimensional, fully realized human beings as women. We are participants in this entertainment industry, and we have something to say.”

This isn’t the first time women are wearing a certain color to make a political statement. Last January, women wore pink pussycat hats to protest the inauguration of president Donald Trump. In September, stars wore blue ACLU ribbons to the 2017 Emmys after Trump announced his plans to end DACA.