Immediately after “Moonlight” won the Golden Globe for Best Picture-Drama to end the telecast on Sunday night, the after party dash began for most, but not for the boys from Boston.

The “Good Will Hunting Crew” — Matt Damon, Ben Affleck and Casey Affleck — lingered in the ballroom to huddle with Amazon founder Jeff Bezos and “Manchester by the Sea” director Kenneth Lonergan. With the younger Affleck’s Globe in hand (for Best Actor – Drama) they debated their next move. 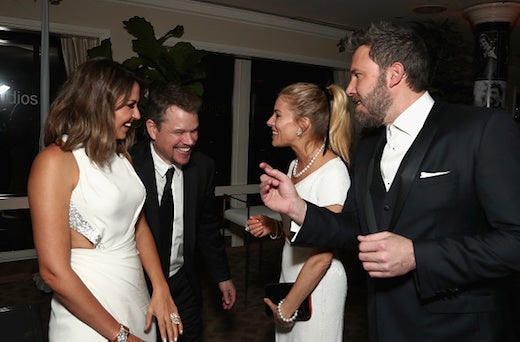 “Amazon,” Damon announced to the group, indicating they should move up to the studio’s party several floors up in the Beverly Hilton. As two security guards materialized to escort them, the “Manchester” crew exited the ballroom by walking through the stage. That’s a boss move.

Nearby, the man that executive produced “Good Will Hunting” for Miramax in the ’90s had his own crew. Harvey Weinstein, the “Lion” producer freshly back in L.A. after the Obamas’ Friday night farewell party at the White House, anchored a circle that included Ryan Reynolds, Blake Lively and Georgina Chapman. Although the Weinsteins didn’t take home any Globes this year, they partnered with Netflix to host their own party. 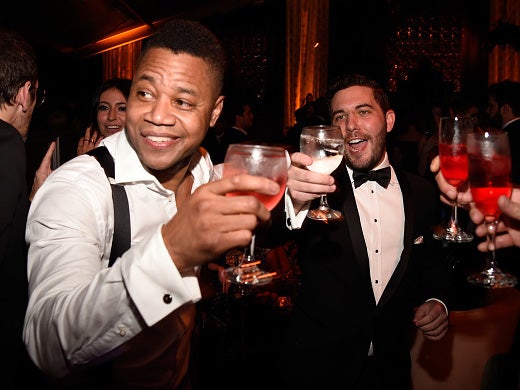 Cuba Gooding Jr. is one of the most reliable “good times” on every awards weekend. (Getty Images)

Also Read: Inside the Golden Globes: 14 Things You Didn't See on TV 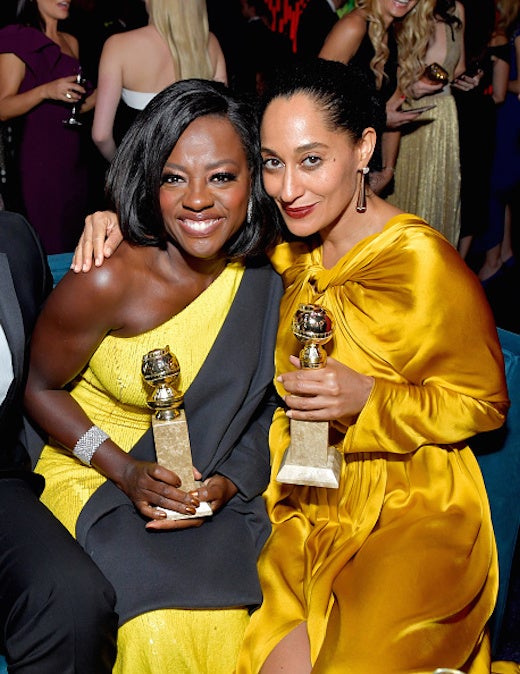 Upstairs in the Stardust Ballroom at the Amazon bash, Fallon’s “Tonight Show” house band The Roots played and Questlove reprised his DJ role from the telecast. Traditionally the most conservative of Emmy and Globes night parties, the home of “Transparent” and “Mozart in the Jungle” was buzzing. It stayed packed the latest. 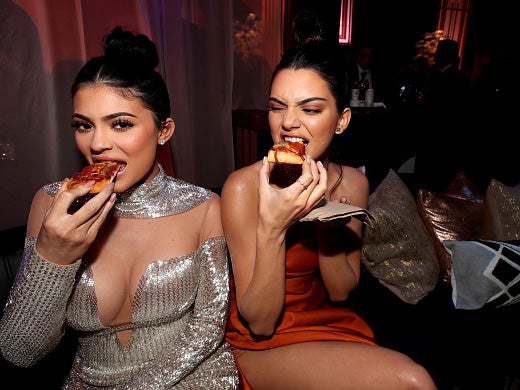 Downstairs at HBO, behind three wristband security checkpoints, former “Sex and the City” lovebirds Sarah Jessica Parker and John Corbett crossed paths as the DJ spun Bell Biv Devoe’s “Poison” and “The Humpty Dance” at the Circa 55 restaurant and covered pool. 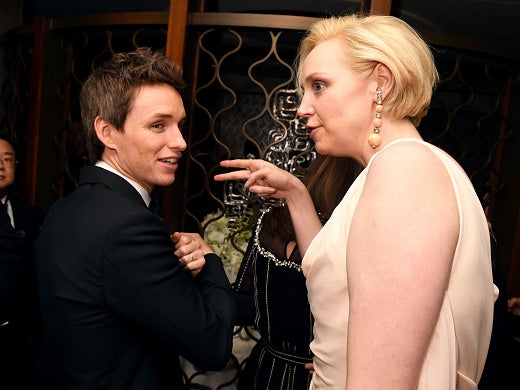 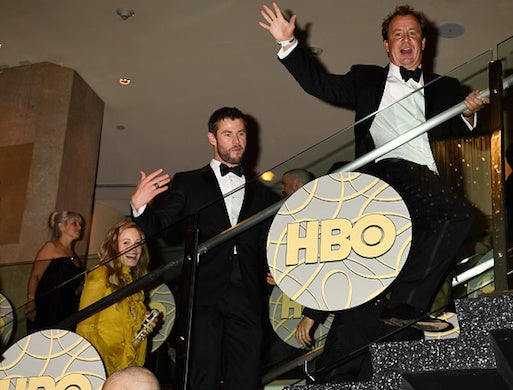 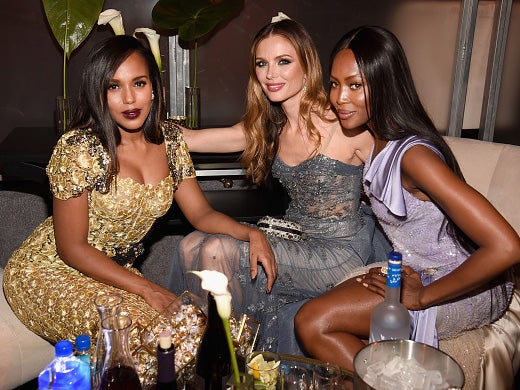 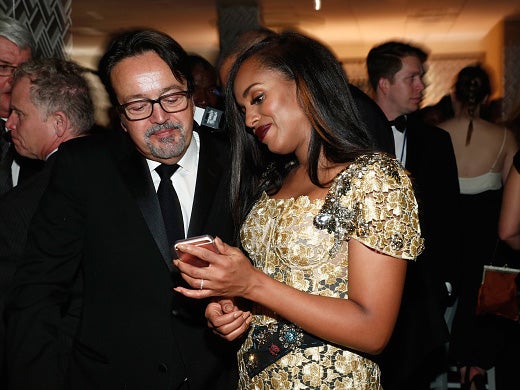 The Fox party basked in FX’s four wins for “Atlanta” and “The People vs. O.J. Simpson.” Whatever gloom hung over their sprawling pavilion from the HFPA blanking the film side (capped by Natalie Portman’s stunning loss for “Jackie” at the end of the three hour show), Fox mitigated with party prowess. 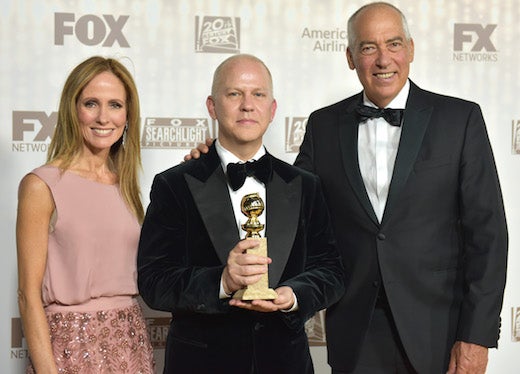 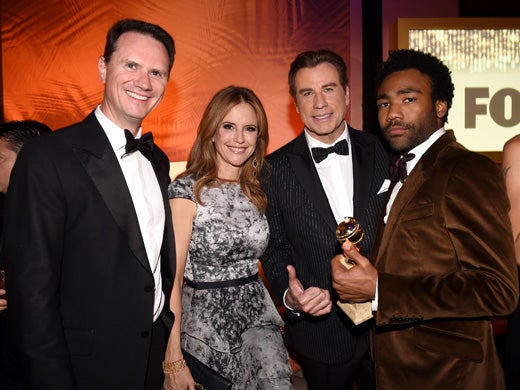 After well-heeled guests and non-nominated celebrities were stranded in a Century City parking garage for hours last year, one 2017 Fox guest told The Party Report that they made it from the Century City check-in to Ryan Murphy’s VIP table with a wine glass in hand in eight minutes. Second, they doled out Jon & Vinnys pizza, importing the most wanted meal on Fairfax to the Globes.

The flow of pizza boxes in this non-traditional environment would have made Jeff Spicoli proud. 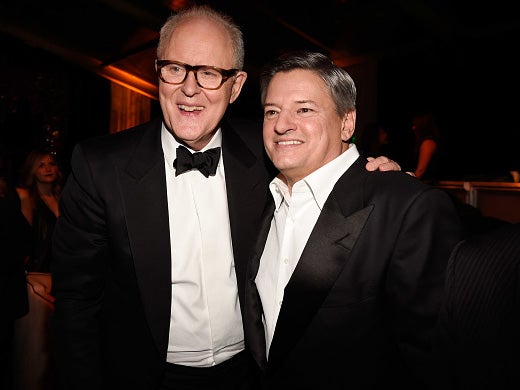 “The Crown” nabbed two trophies, one for Claire Foy and one for the show overall. Veteran John Lithgow was nominated, but did not win. Netflix Chief Ted Sarandos still looks thrilled. (Getty Images)

Other non-traditional Globes names floating through the Beverly Hilton included jeweler Neil Lane (who reminded The Party Report he has now had multiple on-air meetings with “Bachelor Nick Viall” as a ring shopping wannabe fiancé), Nene Leakes, Hillary Duff, and conservative political pollster Frank Luntz. (“I still think Meryl Streep is a great actress. But as a political commentator? Not so good,” Luntz tweeted. Thanks for playing, Frank.) 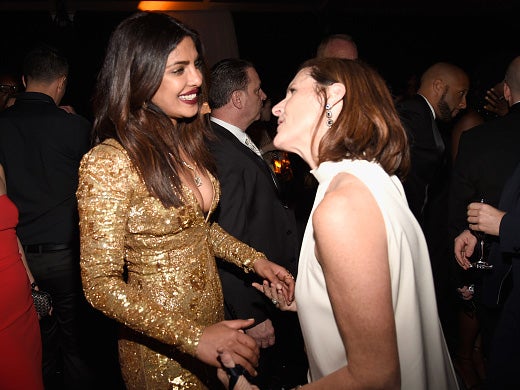 After going seven-for-seven and setting a Golden Globes record, the “La La Land” team decamped from the Beverly Hilton for a gathering at industry haunt Craig’s. The party was a fraction of the size of their shindig stacked with Oscar voters the night before at nearby Cecconi’s. 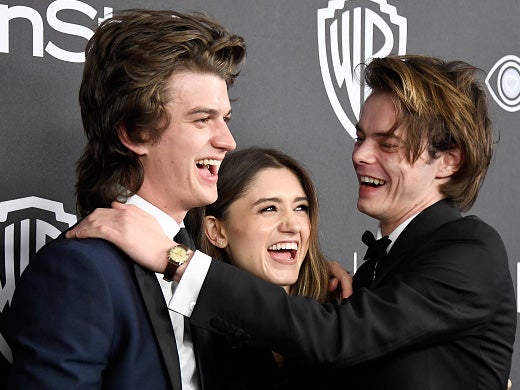 Team “Moonlight” was rumored to be celebrating privately at Soho House, while host Fallon’s own late-night bash was also in West Hollywood at Delilah, the Santa Monica Boulevard supper club from the same guys that hosted Fallon’s post-Emmys hosting party at their Trousdale space years ago. 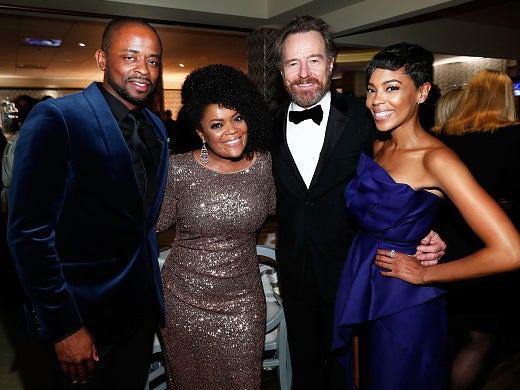 Back at the Hilton, when HFPA President Lorenzo Soria and wife Lilla headed for the gift bag window around midnight, that was the social cue to start wrapping it up. Then, it began to rain.

The sudden shower fast-forwarded the weary shuffle of fatigued photographers and women in heels hiking to the Uber pick-up lot at a Starbucks at the corner Wilshire and Santa Monica Blvd. 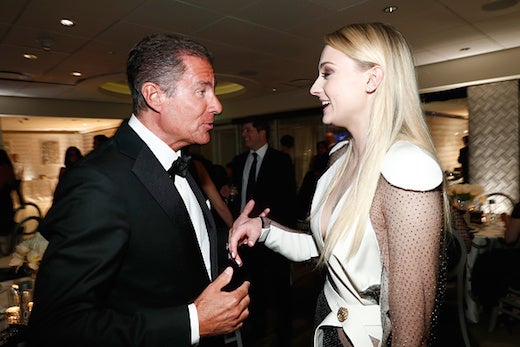 Bootleg Uber drivers tried gouging weary revelers with $60 off-app rides. A fleet of black SUV’s and black tie attendees circled each other as people tried to make a getaway — a symmetrical bookend to a night that began with Fallon’s “La La Land”-inspired traffic jam montage of people trying to get to Hollywood’s party of the year. 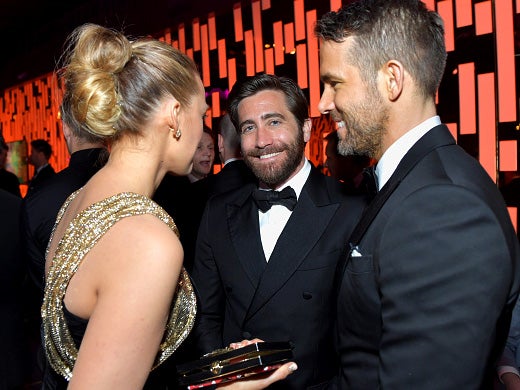 The Hollywood Foreign Press Association seems to delight in confounding prognosticators and did so again during Sunday's 74th Golden Globe Awards, with several unexpected winners taking the stage to claim their trophies. Heavy favorite "La La Land" swept all seven categories in which it was nominated, but many of the other awards had an international flair.

Here are some of Sunday's notable snubs and surprises: