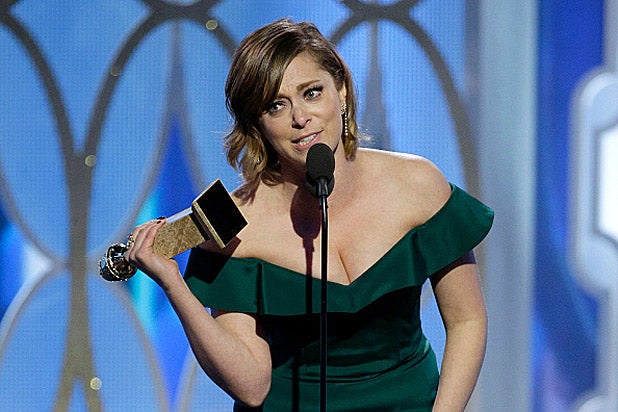 The win, for Best Actress in a TV Series, Comedy, follows “Jane the Virgin” star Gina Rodriguez’s win at last year’s ceremony, and could provide a much needed boost for the struggling CW musical dramedy.

“Crazy Ex-Girlfriend,” premiered in the fall to lackluster ratings, with the show’s most recent outing on Nov. 30 pulling in just 1.1 million viewers and a 0.4 rating in the 18-49 demo.

Whether the win will boost ratings for the series remains to be seen, but there is precedent. Following Rodriguez’s win last year, the next outing for “Jane the Virgin” became the show’s second most-watched episode after the series premiere.

CW president Mark Pedowitz said at TCA earlier on Sunday that despite the show’s disappointing ratings, the network continued to have “great faith” in “Crazy Ex-Girlfriend,” but said no decision had been made regarding its future.

Bloom thanked Pedowitz during her acceptance speech for picking up the show after she and co-creator Aline Brosh McKenna “sent the pilot to every other network in Hollywood and got six rejections in one day.”