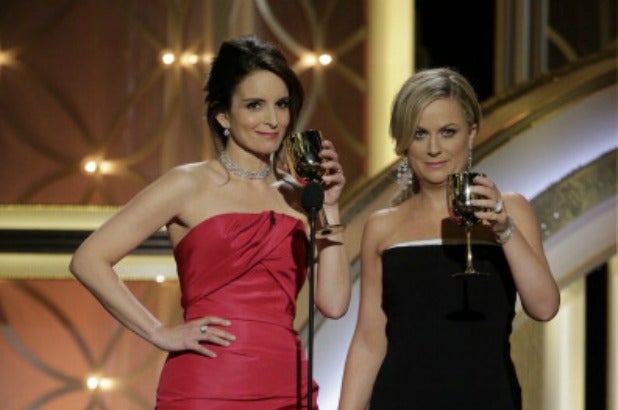 The Golden Globes couldn’t have been much more entertaining, and for that we can thank Tina Fey, Amy Poehler, and, shockingly enough, the Hollywood Foreign Press Association.

The “Saturday Night Live” veterans started the show with a 10-minute wall of laughter. It was the best opening monologue — make that dialogue — of any awards show in recent memory. They set a high bar none of the winners or presenters could match comedically, so they found other ways to entertain.

Diane Keaton sang while accepting Woody Allen’s Cecil B. DeMille Award. Jacqueline Bisset fulfilled the night’s “what was that?” quota with a weird, winding speech for Best Actress in a Supporting Role in a Series, Miniseries, or TV Movie. Andy Samberg delivered a speech that was simultaneously sincere and self-mocking. He won for Best Lead Actor in a Comedy Series for “Brooklyn Nine-Nine,” which also won for Best Comedy Series.

Those awards showed that the Globes maybe aren’t just a freak show any more, full of strange, unpredictable choices. Especially on the TV side, the Hollywood Foreign Press Association has started to spot great shows and recognize them before anyone else can. They kicked off the awards parade for “Homeland” in 2012, and this year gave some love to “Brooklyn,” an acclaimed Fox show that’s struggled in the ratings. The awards would seem to dramatically increase its chances of survival.

And what a balancing act the awards pulled off. It looked like the HFPA might shut out “12 Years a Slave,” which led in the nominations along with “American Hustle.” But when it seemed all was lost, it won the biggest award of the night: Best Motion Picture, Drama.

And: The Globes wrapped everything up in three hours.

I really don’t like awards shows. I think movie and TV stars get enough prizes. But I could reconsider, if all ceremonies go like this one. I’m trying to think of something to complain about, and I’ve got nothing. Well, Cate Blanchett’s joke about Judy Garland and barbituates was weird. But she’d had a few vodkas. Pass.

If I have to nitpick, maybe we could have used even more Poehler and Fey. The bit where Poehler played Fey’s secret son was gold.

“Like a supermodel’s vagina, let’s all give a warm welcome to Leonardo DiCaprio.”

As Fey noted at the top of the hour, when something works in Hollywood, they keep doing it “until everybody hates it.”

Please keep doing this. I think you’ve got a few years, at least.