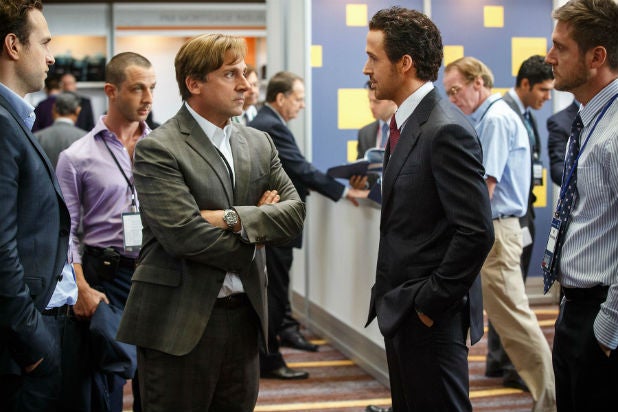 Todd Haynes‘ drama “Carol” found itself in a similar boat, leading all contenders with five nominations including best picture, director and score, while its stars Cate Blanchett and Rooney Mara both drew leading actress nominations.

On the comedy side, Judd Apatow‘s “Trainwreck” and Paul Feig‘s “Spy” scored Best Picture nominations to go along with nods for their respective leading ladies Amy Schumer and Melissa McCarthy. Those two films and “The Big Short” will compete against “The Martian” and “Joy” in the Best Picture – Comedy/Musical category.

Of the five Best Picture – Drama contenders, four films had their directors nominated, though Lenny Abrahamson (“Room”) was left off the list in favor of Ridley Scott (“The Martian”).

Besides McCarthy, “Trainwreck” star Schumer will compete in the Best Actress – Comedy category against her new BFF Jennifer Lawrence in “Joy,” as well as veteran actresses Lily Tomlin (“Grandma”) and Maggie Smith (“The Lady in the Van”).

“Carol” actresses Blanchett and Mara are hoping they won’t cancel each other out, as they face stiff competition for Best Actress – Drama in the form of Brie Larson (“Room”), Saoirse Ronan (“Brooklyn”) and Alicia Vikander (“The Danish Girl”).

The Best Actor – Drama race is shaping up to be a nail-biter, with frontrunners Leonardo DiCaprio (“The Revenant”) and Michael Fassbender (“Steve Jobs“) up against Eddie Redmayne (“The Danish Girl”), Will Smith (“Concussion”) and Bryan Cranston (“Trumbo”). That left Johnny Depp‘s turn as Whitey Bulger in “Black Mass” standing out in the Boston cold.

On the comedy side, Al Pacino and Mark Ruffalo scored surprise nominations for “Danny Collins” and “Infinitely Polar Bear.” They’re up against the two “Big Short” stars as well as Matt Damon from “The Martian.”

In the supporting actress category, Alicia Vikander picked up a second nomination (following “The Danish Girl”) for her convincing turn in “Ex Machina,” which has her squaring off against Jane Fonda in “Youth,” Jennifer Jason Leigh in “The Hateful Eight,” Helen Mirren in “Trumbo” and Kate Winslet in “Steve Jobs.”

The supporting actor race is also quite competitive, especially with Rocky Balboa looming large. “Creed” star Sylvester Stallone was nominated alongside Paul Dano‘s work as a young Brian Wilson in “Love and Mercy,” Mark Rylance‘s turn as a Russian spy in “Bridge of Spies,” Idris Elba‘s performance as an African warlord in “Beasts of No Nation” and Michael Shannon‘s turn as a slippery realtor in “99 Homes.”

The cast of “Spotlight” was omitted from the HFPA announcement, though the stars shouldn’t worry considering they’re up for SAG’s coveted ensemble award.

With a plethora of awards contenders, it was no surprise that 20th Century Fox led all studios with 12 nominations thanks to “The Martian,” “The Revenant,” “Joy” and “Spy.” Meanwhile, Universal and the Weinstein Company each scored eight nominations on the strength of films such as “Steve Jobs,” “The Danish Girl,” “Carol” and “The Hateful Eight.”

“Carol” actually scored the most nominations with five, followed by “The Big Short,” “The Revenant” and “Steve Jobs” with four apiece.

On the animation side, “Anomalisa,” “The Good Dinosaur,” “Inside Out,” “The Peanuts Movie” and “Shaun the Sheep” were nominated for best picture.

Hungary’s “Son of Saul” received an expected nomination for best foreign language film along with “The Brand New Testament” (Belgium/France/Luxembourg), “The Club” (Chile), “The Fencer” (Finland/Germany/Estonia) and “Mustang” (France).

“Fifty Shades of Grey” also scored a Golden Globe nomination for its original song “Love Me Like You Do.” The other films that received song nominations were “Love & Mercy,” “Furious 7,” “Youth” and Sam Smith’s theme from the James Bond movie “Spectre.”

And then… there was television.

“House of Cards” star Robin Wright will match wits against Viola Davis (“How to Get Away With Murder”), Taraji P. Henson (“Empire”), Caitriona Balfe (“Outlander”) and Eva Green (“Penny Dreadful”).

The HFPA’s Best TV Series – Musical/Comedy category boasts an extra, sixth nominee this year. Amazon has two shows competing for the top prize between “Transparent” and “Mozart in the Jungle,” which are up against HBO’s “Veep” and “Silicon Valley,” Netflix’s “Orange Is the New Black” and Hulu’s original series “Casual.”