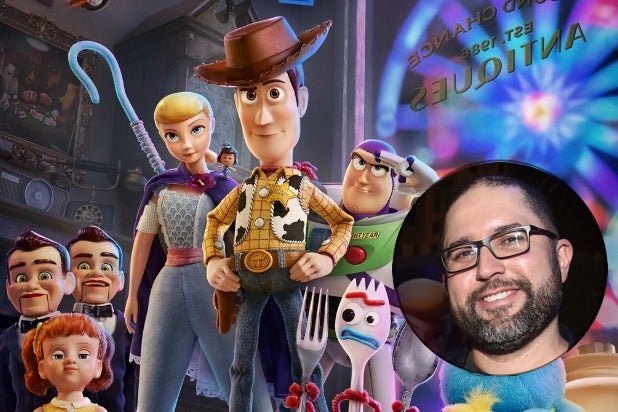 After working for over a decade at Pixar, a studio with 15 Oscars, it is Josh Cooley’s turn to ride the awards season train. His feature film directorial debut, “Toy Story 4,” was nominated Monday for a Golden Globe, capping off a run that saw Cooley take control of Pixar’s most famous characters during an unprecedented period of upheaval for the studio.

“It’s a big deal for me. From the beginning, I had a lot of pressure on myself because I was working with these beloved characters,” Cooley told TheWrap. “It’s exciting to do a ‘Toy Story’ film but also so nerve-wracking because the expectations were so high after the last film. To have the voters and the audience enjoy it so much feels really great.

After working as a storyboard artist on five Pixar films and directing his own short, “George and A.J” in 2009, Cooley got his first big break co-writing the Oscar-winning “Inside Out” with director Pete Docter and Meg LeFauve. Then, after being named co-director of “Toy Story 4” alongside John Lasseter, he became the sole director of the sequel after Lasseter chose to step down as director in 2016, staying on as a producer.

“By the time John stepped down as director, we had already established that the film would be focused around Bo Peep, why she wasn’t in the third film, and her relationship with Woody,” Cooley said. “We were adjusting how the two reunite and how it affects Woody at that point.

But in 2017, everything changed at Pixar. Just a few months after publicly announcing at the D23 Expo that he would no longer co-direct “TS4,” Lasseter took a six-month sabbatical after reports surfaced of sexual misconduct claims against him. The following year, Disney announced that Lasseter would leave the studio, with Docter replacing him as chief creative officer.

Meanwhile, Disney turned all of Hollywood upside down by acquiring 20th Century Fox and announcing the launch of Disney+, a streaming service that prompted Pixar to launch a new short film program called SparkShorts that would allow animators to develop their own projects for streaming. While all of this was going on, Cooley was deep in production on “Toy Story 4” and found that the work helped turn all the headlines and leadership changes into background noise.

“We were just telling ourselves, ‘We know what we have to do to get this film done, and we are just going to focus on that,'” he said. “And Disney+ has been really exciting for us because it has given us an opportunity to keep playing with these new characters we’ve created like Forky, and I think there’s a lot more possibilities for all the animators now.”

Having an embarrassment of riches in his voice cast also helped. Along with the usual “Toy Story” suspects like Tom Hanks, Tim Allen, and the returning Annie Potts, “Toy Story 4” saw stars like Keanu Reeves enter Pixar’s recording studio along with a series of classic comedy icons like Carol Burnett, Betty White and Mel Brooks for special cameos. But the highlight of recording was the reunion of Keegan-Michael Key and Jordan Peele as Ducky and Bunny, the showstealing plush animals who won over audiences with their “Plush Rush” scheme.

“I knew going into it that they knew each other so well going back to their ‘Mad TV’ days. It’s why I cast them, because they’re playing characters that are literally stuck together,” Cooley said. “So much of what you see in the film is improv. I just set up the scene for them and gave them the general idea of where it would go.”

“There are some scenes where they were making these [inside] jokes that only they would get, but I enjoyed it because it created this incredible laughter between them that was so key to who they were playing.”

The antique shop that the two plushies form their plan in was the most complicated element of the entire film. In 2010, “Toy Story 3” blew away audiences with the very noticeable surge in animation quality from the original “Toy Story” films in the ’90s to now. But “Toy Story 4” had examples of scenes that never could have been done with “Toy Story 3,” and the level of detail required for the antique shop was a prime example.

“It’s a store full of thousands of items and shelves and glass windows. We had no idea whether we would even be able to render all of that when we first put the story together. Pixar started working on the technology when we started doing the film, and that was five years ago. In the middle of it, the tech guys told us, ‘Oh, yeah, we can do this.’ I don’t know how, but it’s amazing how quickly technology advances.”

Now that he’s got a billion-dollar box office hit under his belt, Cooley is ready to follow it up with another Pixar film based on his own original story and characters. While he’s not divulging any details, he did say that he’s gotten started on developing his next film while assisting Docter with “Soul,” the cosmic adventure that Pixar will release next summer.

“Every film is different. That’s the biggest lesson I’ve learned working here,” Cooley said. “You think, ‘Oh, I’ve worked on this film and learned a lot so this next one should be just like that!’ It’s never like that. There’s always some new challenge or something new to learn.”