South African journalist Margaret Gardiner, a member of the Hollywood Foreign Press Association, on Monday apologized for mistakenly asking “Judas and the Black Messiah” star Daniel Kaluuya after his Oscar win what it was like working with Regina King — although Kaluuya’s film was directed by Shaka King.

“I am so so so sorry,” Gardiner said late Monday after video of her question circulated on social media. “I made a mistake in what I said. I apologize to Daniel. I apologize.”

“#DanielKaluuya I did not mistake you for Leslie Odom Jnr. I’m sorry if it seemed that way,” Gardiner said in a tweet following backlash to her question. “I had wanted to ask about Regina King not being nominated as a director for ‘One Night in Miami,’ and your win for ‘Judas and the Black Messiah’ for the community at this time.”

Gardiner, a longtime Golden Globes voter who was covering the Oscars for the U.K.’s The Sunday Times Magazine, continued: “There was a sound issue so I dropped the part about Regina King and restated my question. What does it mean for the community at this time. When I listed to the audio, I do understand, but there was no confusion.”

In a video the press room at Sunday night’s Academy Awards, Gardiner asked Kaluuya, “I’ve been following you since the beginning of your career, and I was wondering what it meant for you to be directed by Regina, what this means for you at this time with the world and the state that it’s in?”

In repeating her question, Gardiner dropped all references to the director. “I was wondering what it meant for you to win with the world and the state that it’s in in the moment?” she said. But many took to Twitter to point out Gardiner, who is white, seemed to confuse two Black actors or two Black directors, in a year that has seen record levels of diversity in its nominations.

Franklin Leonard, founder of The Black List and a TV and film producer, shared the video as well, tweeting, “There’s a dissertation to be written about this interaction and this interaction alone. State of the system in one minute… Even mere minutes after you win an #Oscar for playing Fred Hampton. Even then.” 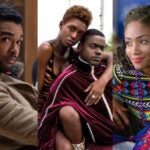 Gardiner’s verbal slip comes at a time when the HFPA is under fire for its lack of Black members and track record of snubbing movies and TV shows with Black creators. Following furor over a February L.A. Times exposé, the organization had hired a diversity consultant to help fix inherent “systemic” issues, but last week, USC professor Shaun Harper quit following a meeting where he was confronted with the details of the HFPA’s problems. In addition, former HFPA president Philip Berk was expelled last week after sending an email to members with a post describing Black Lives Matter as a “hate movement.”

Gardiner initially tried to defend her question. “I’m sorry but I didn’t mistake Daniel, I wanted to ask about how he felt winning at the most represented Oscars yet Regina King not being nominated for One Night in Miami, the sound was problematic, so I dropped the Regina King part & asked what it meant to win at this time,” she said, before offering a fuller apology later in the day.