Actress Lisa Banes is in critical condition at a Mount Sinai Morningside hospital in New York after a hit-and-run incident involving a man on a scooter on Friday.

“We have several days ahead of us to pray for Lisa,” Banes’ wife, Kathryn Kranhold, told the New York Daily News. “If anyone has any information about the scooter driver, we ask them to please call police.”

Banes, whose on-screen credits include “Gone Girl” and “A Cure for Wellness,” was in New York to perform a show for the Manhattan Theater Club. According to police, she was on her way to dinner when a man on a motorcycle or scooter ran through a red light and collided with Banes in the crosswalk. 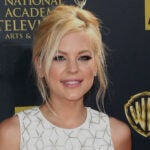 “He just wiped her out,” a witness told the Daily News. “He didn’t even stop. He just kept going … People were filming her, not helping her.”

No arrests have been made.

Banes has appeared in a number of films and TV series, including “Cocktail,” “Nashville,” “Royal Pains” and “One Life to Live.” In theater, her credits include Manhattan Theater Club’s “The Niceties,” “Isn’t It Romantic,” for which she received a Drama Desk Award nomination in 1984; and “Look Back in Anger” in 1981.