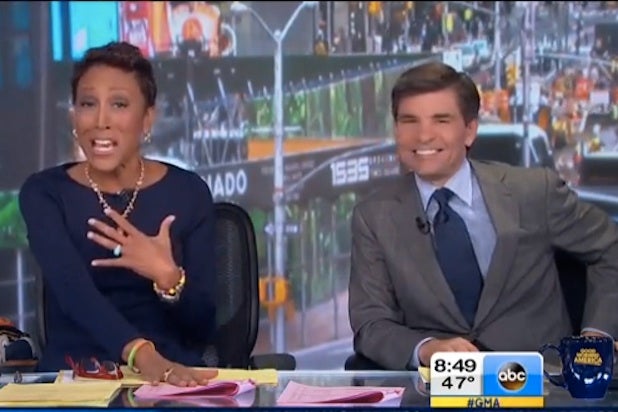 Now this is awkward.

Josh Elliott’s “Good Morning America” co-hosts presented a loving tribute to the outgoing anchor with a compilation of some of his greatest moments on the ABC morning show — but the one conspicuous element missing from the episode was well, Elliott himself, on set to thank them for the farewell.

“You know it has been quite a week here on ‘Good Morning America,'” co-host Robin Roberts observed. “And man, thank you, Josh, for all the wonderful things. Very, very gracious. He’s leaving us to join — to join NBC Sports.”

Elliot’s contract negotiations with ABC broke down last weekend, and he announced he was leaving “GMA” to join NBC Sports. TheWrap reported that the wheeling and dealings were tumultuous between ABC News president Ben Sherwood and Elliott.

“And you know we’re so sad to see him go,” Roberts added. “I know you are sad to see him go but he is returning to his roots in sports and we want to take a few minutes now to look back on some of our favorite Josh moments.”

The show played some of Elliot’s most memorable moments including his hilarious encounter with a kinkajou.