In this morning’s roundup of movie news ‘n’ notes from around the web, rumors swirl around “Spider-Man,” and Roger Ebert remembers the movie that wasn’t.

Drew McWeeny says that Sony is going to choose Logan Lerman, the star of “Percy Jackson and the New Olympians,” to be the new Spider-Man in the upcoming film from director Marc Webb. Sony says no way. But McWeeny sticks to his guns, and points out that Sony has a habit of denying “Spider-Man” news that later turns out to be true. The word on this “re-boot” is that Sony wants to bring Spidey back to his teen roots, so it probably helps that Lerman is an actual teenager … and that he probably has more than a few actual teenaged fans. (HitFix)

Roger Ebert tells the tale of writing what was supposed to be a Sex Pistols movie for director Russ Meyer and the late Pistols manager Malcolm McLaren in 1977. The movie crashed and burned and was never made, but it supplied Ebert with some colorful anecdotes on its way down. I can testify that Meyer’s recollections of the experience add a bit more salacious detail, but out of respect for Roger I won’t go there … (Chicago Sun-Times) 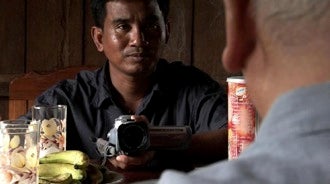 The 2010 Full Frame Film Festival (which is devoted to documentaries) announces its winners, and A.J. Schnack offers his take. He figures that the big winner, “Enemies of the People” (right), is likely in line for an awards push later this year. It’s about “atrocities committed by the Khmer Rouge, which puts it right in Oscar’s sweet spot. “Restrepo,” one of the hottest docs out of Sundance this year, took runner-up awards in two categories. (All These Wonderful Things)

Speaking of awards, the Aspen Shortsfest announced its own prizes on Sunday. The full list of 20 winners is at the festival’s website; it includes “Kavi,” a film from Gregg Helvey that won a Student Academy Award in 2009 and was nominated for an Oscar in January. Four of the Aspen winners have now qualified for the 2010 Oscars: “Angry Man” (Best Animation), “Seeds of the Fall” (Best Comedy), “The Six Dollar Fifty Man” (Best Drama) and “The Unhappy Woman” (Best Short Short). While waiting to see if the Academy notices, the filmmakers can collect prizes of up to $2,500. (Aspen Shortsfest)

Ah, the art and craft of casting: Moviefone assembles that it calls “the best movie star screen test videos.” Best, in this case, is a relative term – some of these are pretty good, but others are definitely not. Includes video of Kurt Russell as an ineffectual Han Solo in “Star Wars,” Robert De Niro as a jittery Sonny Corleone in “The Godfather,” Marlon Brando acting petulant as he tries out for the James Dean role from “Rebel without a Cause,” a goofily wide-eyed Gerard Butler in “Dracula 2000.” (And he got the role, which makes you wonder just how bad the other people were who auditioned). Henry Thomas, Natalie Portman, Tobey Maguire and Miley Cyrus round out the group. (Moviefone)