In this morning’s roundup of movie news ‘n’ notes from around the web, Cannes has a hostess and the Razzies might have a date with TV.

New York Magazine’s Vulture column has exciting news: next year’s Golden Raspberry Awards, the annual salute to the worst in film, will be televised. Of course, that excitement should be tempered by the fact that Vulture is jumping the gun from the looks of the Razzie press release, which only says that the Golden Raspberry Award Foundation “is exploring the possibility of a first-ever television broadcast of their award ceremonies next Spring.” (Italics are mine.) This year’s Razzies would have made for swell TV, with Sandra Bullock showing up to accept her Worst Actress award – and the show five years ago would have been a keeper as well, when Halle Berry dropped by to pick up her award for “Catwoman,” and brought along the Oscar she won for “Monster’s Ball.” But most years the “winners” understandably stay away, which might make the proceedings a little less telegenic. (Vulture)

The Cannes Film Festival announces its mistress of ceremonies for this year’s event: actress Kristin Scott Thomas, who was born in England but lives in Paris. Rebecca Leffler says the gig will be a modest one: she’ll host the opening gala on May 12 and introduce the jury, chaired by director Tim Burton; then she’ll return 11 days later for the closing night ceremony. But the big news out of Cannes will come Thursday, when the festival announces its lineup. (The Hollywood Reporter) 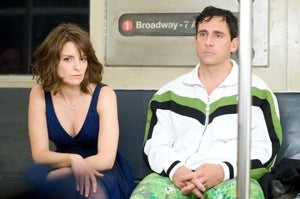 The revised weekend boxoffice figures that moved “Date Night” from first to second place marked the end of a notable streak: director Shawn Levy’s last five films had all finished in the top spot the weekend of their release, and his Steve Carell/Tina Fey comedy initially looked to be the sixth before the recount revealed that “Clash of the Titans” had beaten it. Steven Zeitchik wonders what the Levy streak really means, and points out that it was caused not by big grosses so much as by release dates without a lot of competition: “The streak … may be less a function of Levy having his thumb on the cultural pulse as it is the fact that he lands assignments for movies that are primed … to find the right spots on the calendar.” But not right enough, in this case. (24 Frames)

Meanwhile, Zeitchik’s L.A. Times colleague Patrick Goldstein asks why Carell and Fey went from good TV shows to a bad movie. The answer, he decides, has to do with the fact that TV is better than movies these days. An easy enough explanation, though it’s rather surprisingly – and depressingly – prefaced by this generalization from a guy who writes about the film business for a living: “Going to the movies always involves a little disappointment.” (Does Goldstein want to change the name of his column from The Big Picture to The Small Screen?)

And while we’re exhausting the “Date Night” angles, Vadim Rizov surveys seven other actors who crossed the line between film and television, from the big successes (John Travolta, Clint Eastwood, George Clooney) to the flops (David Caruso) to Tim Allen, for whom he serves up a remarkable stat and the ultimate backhanded compliment: “one weekend in 1994, he had the number one show ("Home Improvement"), number one book (his memoir "Don’t Stand Too Close To A Naked Man") and movie ("The Santa Clause") in the country — not bad for a guy whose range was limited to grunting, scratching himself and projecting immense self-satisfaction and cluelessness.” (The Independent Eye)

Prompted by Variety’s dismissal of its full-time critics, Stephanie Zacharek’s move to Movieline and Eric Kohn’s hiring at indieWIRE, Anne Thomson discusses the “new paradigm” when it comes to film criticism. Basically, it means that critics have to do more for less, which sounds like the new paradigm in a lot of fields these days. (Thompson on Hollywood)