In this morning’s roundup of movie news ‘n’ notes from around the web, Shrek gets naughty, Cannes gets ready and Sigourney Weaver takes aim at “The Hurt Locker."
With one day to go before the announcement of this years Cannes Film Festival lineup, Variety says that Alejandro Gomzalez Inarritu’s “Biutiful” and Mike Leigh’s “Another Year” will screen in competition at the festival. Justin Chang says that films that are unconfirmed,, but strong possibilities, include Doug Liman’s “Fair Game,” Bertrand Tavernier’s “La Princesse de Montpensier,” Susanne Bier’s “The Revenge” and Julian Schnabel’s “Miral.” He says it’s still uncertain whether Terrence Malick’s “Tree of Life” will be ready in time for the May 12-23 fest; with what is likely to be a lackluster American presence in competition at the festival, U.S. filmmakers could certainly use somebody like Malick to represent. (Variety)
During Oscar season, James Cameron was nothing but nice to his biggest rival (and, you may have heard, his ex-wife) Kathryn Bigelow. But one of Cameron’s “Avatar” stars isn’t so kind: According to the New York Post, Sigourney Weaver, who accompanied the director on his recent trip to South America, reportedly told a Brazilian news site, "Jim didn’t have breasts, and I think that was the reason [he didn’t win]. He should have taken home that Oscar." In the past, she said, a movie like “Avatar” would have won – but “today it’s fashionable to give the Oscar to a small movie that nobody saw." I’d suggest that “small movies” like “The Hurt Locker” and “No Country for Old Men” are distinctly better than most of the blockbuster winners of past years, but maybe that’s just me. (Page Six) 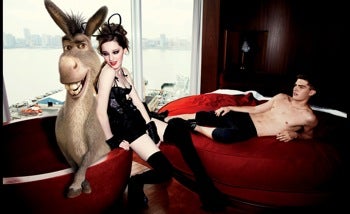 Never one to shy away from cross-promotion (those damn “Bee Movie”-themed “Dol-bee” spots are still running in some movie theaters), DreamWorks Animation gave a men’s magazine called Vman (the male version of V) the okay to feature “Shrek Forever After” characters in a fashion spread that’ll hit newsstands just before the film debuts at the Tribeca Film Festival. But the Hollywood Reporter’s Paul Bond says the photos turned out to be a bit kinkier than DreamWorks and Paramount envisioned, so the studios are making it known that they’re not happy about a shoot that, they say, “did not turn out the way originally envisioned.” Then again, this way DreamWorks gets the photo spread that makes the movie look as if it’s not just for kids … and then they get to reassure parents by complaining about it. The best of both worlds, perhaps? (The Hollywood Reporter) Judge for yourself: the photo spread is here. (Vman) (Photo by Ellen Von Unwerth/Vman)
Anne Thompson applauds Marvel for apparently wooing Joss Whedon for the film version of its superhero collective “The Avengers.” Of course, her approval comes couched in cautionary tones about a writer-director who’s had more flops (“Alien: Resurrection” and his one feature directing job, “Serenity”) than hits (the most notable of which were TV series like “Buffy the Vampire Slayer”). (Thompson on Hollywood)  And Kevin Jagernauth sounds openly skeptical: “the leap between pictures doesn’t get much bigger than this.” Yeah, but the fanboys are very happy, which has got to be worth something. (The Playlist)
If 3D doesn’t wow you, there might be a reason: Leo Owen reports that at least 12 percent of the population has a problem with binocular vision (a prerequisite for appreciating the technique), and that five percent have “visual disabilities” that make it impossible to properly see 3D. But you don’t have to be diagnosed with amblyopia or strabismus to embrace the “3D is not for me” stance; seems to me that Owen is happy to welcome everybody into his club, including folks who just don’t like wearing those glasses. (Shadowlocked)