In this morning’s roundup of movie news ‘n’ notes from around the web, the director of ‘Moon’ gets a lesson in DVD revenues, and the makers of “The Hurt Locker” still haven’t seen that lawsuit.

Duncan Jones, the director of the award-winning sci-fi film “Moon” (and, incidentally, the son of David Bowie) is mad, or ignorant, or contrite, or some combination of all of those things. Anne Thompson watched Jones’ Twitter account on Thursday, and complied a series of tweets in which the filmmaker bitterly complains about the fiscal shenanigans that he says will prevent him from receiving any revenue from the U.S. DVD release of his film (with star Sam Rockwell, below). “Did you know what sometimes, when a studio wants to screw an indie film, they actually ‘give away’ the DVD to large rental chains?” reads one tweet. “then they can split rental revenue with those chains, and pay the film makers… you guessed it… nothing.” By the end of the day, though, Jones had taken down the tweets and commented, “Shouldn’t try to understand revenue reporting. didn’t have all the info. Being assured it’s all as it should be… Will stick to directing!” That’s probably a good idea, but it’s so much more entertaining when he moonlights as an angry tweeter. (Thompson on Hollywood) 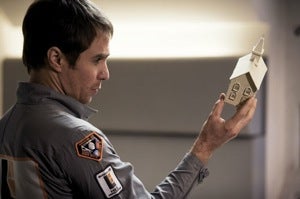 One month ago, four days before the Academy Awards, Army Master Sgt. Jeffrey Sarver got lots of attention when his lawyer announced a lawsuit against the makers of “The Hurt Locker” for basing the lead character on Sarver without permission. Since then, you’d imagine that some heated behind-the-scenes negotiations have been taking place … but you’d be wrong, because Matthew Belloni reports that none of the defendants have even been served with the complaint yet. Attorney Geoffrey Feiger insists that his March 3 press conference wasn’t just a publicity stunt, that he’s definitely going to serve the defendants some time in the next month; Summit Entertainment, meanwhile, has an attorney ready to go, but the company is waiting to see the papers before it does anything. Belloni says that Feiger’s initial letter to Summit “expressly threatened a messy public battle if Summit didn’t pay up,” though the public would probably have been a lot more interested if things had happened a little closer to the Oscars. (THR, Esq.)

Oscilloscope Laboratories sees a niche it can fill – the studio with a sense of humor! – and goes for it with an April 1 press release announcing its acquisition of the 1971 Woody Allen classic “Bananas.” In fact, the stuff in the press release about Allen’s movie is an April Fools Day joke, and the movie that Oscilloscope actually acquired is Frederick Gertten’s documentary “Bananas!*,” about Nicagaraguan plantation workers who sued the Dole Food Corporation. David Poland has a photo of the phony press release, with its quote in which Allen salutes the original profession of Oscilloscope’s co-founder, Adam Yauch: “I’ve been a fan of the Beastie Boys since Hello Nasty came out in 2001 and Adam Yauch is my favorite member of the group.” Gertten’s “Bananas!*,” which itself drew a later-withdrawn defamation lawsuit from Dole, will be released in the fall. (The Hot Blog)

The Guardian reports that Martin Scorsese’s longstanding commitment to film preservation extends all the way to Bollywood – or, rather, all the way to the pre-Bollywood cinema of India. The 1948 comedy/musical “Kalpana,” “a masterpiece of India’s cinematic golden age,” will soon undergo restoration at the hands of Scorsese’s World Cinema Foundation. The surrealistic blend of comedy and dance, which used dream sequences to illustrate the story of a writer pitching his movie to a producer, was almost beyond repair, says Jason Burke: “decades of tropical heat and humidity severely damaged the only known copy … and the film was close to being lost forever.”  (The Guardian)