In this morning’s roundup of Hollywood news ‘n’ notes from around the web, a terrorist heads to Cannes and the “Messenger” crew really does like each other.

One of those open Cannes slots was just filled: Cineuropa says that Olivier Assayas’s “Carlos,” a five-and-a-half hour, three-part miniseries made for Canal + television, will screen out of competition at the festival. The film deals with the international terrorist known as Carlos the Jackal; the real Carlos, who’s in a French jail, says the script is filled with inaccuracies and went to court to (unsuccessfully) petition for a pre-release screening. (Cineuropa) 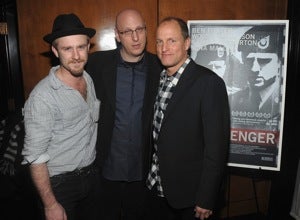 Back in January, I had lunch with a group of folks from the film “The Messenger,” including director Oren Moverman, producer Lawrence Inglee and stars Woody Harrelson and Ben Foster. At the time, Moverman said “all of us at this table want to keep working together,” and Harrelson added that he would happily sign a contract to work with that group of people for the rest of his life, at “a fraction of what you would have made.” Now comes word that Moverman has been signed to direct an adaptation of the James Ellroy story “Rampart” … and that his producer will be Lawrence Inglee, and his stars Woody Harrelson and Ben Foster.  TheWrap’s Jeff Sneider runs down some of the loose ends of a story that proves, I guess, that the gang’s buddy talk wasn’t just fake Hollywood camaraderie. But Harrelson’s salary remains unclear. (Deal Central) (Photo of Foster, Moverman and Harrelson by Dimitrios Kambouris/Getty Images)

If you’re under the impression that “Kick-Ass” had a disappointing first weekend at the boxoffice, Cole Abaius begs to differ. “’Kick-Ass’ wasn’t a failure except at playing the expectations game,” he says. “’Kick-Ass’ is an indie film made for $30 million that just made $37 million world-wide by its U.S. opening weekend.” He then lines up the reasons for why it didn’t make more: the R rating hurts “when your target audience is 14-year-old boys”; the film didn’t get a boost from its controversy because the controversy wasn’t loud enough; it didn’t have stars (except Nicolas Cage); Lionsgate marketed it as a comedy, which it wasn’t … So he thinks that it was a success, “even if it doesn’t exactly feel that way.” Hmm, you think one of the reasons it doesn’t feel that way is articles full of excuses for why it didn’t do better? (Film School Rejects)

Kyle Buchanan tells the fascinating story of relentlessly colorful director/actor Vincent Gallo, who almost three years ago agreed to act in a film called “The Funeral Director,” took over the rocky production midway through the shoot, and now has a movie coming out called “Promises Written in Water” – the same film, though you’d never know it from hearing Gallo’s accounts of how he came to make the movie. Lost in the shuffle is the original writer/director, Pete Red Sky. And now the film is rumored to be getting an out-of-competition slot at Cannes – where Gallo’s last outing, the sexually explicit “Brown Bunny,” drew one of the most raucous and negative reactions Cannes had seen in years. Is it bad to hope for an encore? (Movieline)

In related (but officially unaffiliated) news, the Critics Week lineup of films, which runs in Cannes at the same time as the festival, but is not a true part of the main event, was announced on Monday. One American film, director David Robert Mitchell’s recent South by Southwest entry “The Myth of the American Sleepover,” made the list, along with seven first features, seven shorts, one documentary (a first for Critics Week), and a whole lot of movies from French filmmakers. (indieWIRE)