In this morning’s roundup of Hollywood news ‘n’ notes from around the web, Bond takes a break and the LACMA film program falls back on hard times.
Is the film program at the Los Angeles County Museum of Art in trouble once again? Karina Longworth delivers an update on the program, which was in danger of elimination last summer until public outcry, the support of the likes of Martin Scorsese and Clint Eastwood, and some major donations saved it. But now the series, which recently concluded a Jean Renoir retrospective, may be at risk come the end of June, when its funding will run out. A couple hundred grand will keep it going, which ought to be peanuts in Hollywood … (L.A. Weekly)
Alex Walton, a veteran movie exec who’s handled films like Woody Allen’s “Match Point” and Noah Baumbach’s “The Squid and the Whale,” has joined Exclusive Media Group as the president of international sales and distribution for Exclusive Film Distribution. The former Paramount Vantage VP will be on hand for Exclusive’s upcoming slate of films, which includes Peter Weir’s “The Way Back” (with Ed Harris, Saoirse Ronan, Colin Farrell and Jim Sturges) and “Cloverfield” director Matt Reeves’ “Let Me In,” which stars Richard Jenkins, Kodi Smit-McPhee from “The Road,” Chloe Moretz from “Kick-Ass.” (Hollywood News.com) 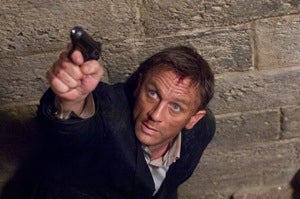 Patrick Goldstein looks at the most high-profile bit of fallout from MGM’s financial woes and ownership uncertainty, the suspension of the next James Bond movie (it’ll be the 23rd when and if it ever gets made). His verdict: good. “In fact, if I were at the Bond helm,” he says, “I’d put the franchise in suspended animation for a while.” For evidence that 007 is looking old and tired, he cites Bond 22, “Quantum of Solace,” the most expensive Bond movie ever. The funny thing is, if “Quantum” is a disappointment, it’s only a losing streak of one: its predecessor, “Casino Royale,” was widely seen as the kind of invigorating reboot of the franchise that Goldstein now thinks is needed again. (The Big Picture)
Brian Newman pays tribute to the folks who sift through thousands of submissions and choose what films play at festivals, only to be pilloried for their choices by blog-wielding film aficionados. “These poor souls watch more than 500 films a year on average, only ten or twenty of which might be worth me ever seeing,” he says, “and for all that thankless work, all they get is a bunch of name-calling in the blog-o-spheres.” Well, it’s not all they get, certainly. But it’s definitely some of what they get. (Springboard Media)

You might think of it as just another film festival, but Gregg Goldstein says that Tribeca is no less than an attempt “to try and redefine how indie films are distributed.” The festival is doing so, he says, though its TFF Virtual option, which allows eight films to be streamed online, and through Tribeca Film’s VOD offerings. “Both throw significant curveballs into the conventional acquisition scene,” says Goldstein, who surveys the climate for Tribeca pickups, and finds that at the moment few films are generating much heat. But it’s better than last year, when things were really dismal. (The Hollywood Reporter)

J. Hoberman, meanwhile, delivers his own message to Tribeca: “Party Harder!” By that he means that the fest should pattern itself after the Rotterdam festival, “a scrappy, cinephilic urban festival that has thrived for years in the shadow of Berlin, thanks to its freewheeling commitment to (and subsidies of) independent, experimental, and Third World cinema, not to mention a long-standing interest in innovative delivery systems, outré film culture, and a funky late-night celebratory atmosphere.” Sounds like fun – but Hoberman, sensibly, doesn’t think it’s going to happen. (The Village Voice)