In this morning’s roundup of Hollywood news ‘n’ notes from around the web, “Sex and the City” lines up the sponsors, but summer’s not just for blockbusters.

Here’s a refreshing summer preview: Peter Knegt lists the 25 movies you should see this summer without mentioning “Iron Man” or “Toy Story 3” or even “Inception.” Instead, his are the 25 indie movies you should see – or, rather, the 24 you should see and one you should avoid, because he comes down pretty hard on number 25, Joel Schumacher’s (camp classic in the making?) “Twelve.” But he really likes “The Kids Are All Right,” “I Am Love” (photo below), “Cyrus” and quite a few others. And, he reminds us, last summer wasn’t exactly a vast wasteland when it came to quality film: it did bring “The Hurt Locker,” “The Cove,” “In the Loop” and a few more pictures you might have heard of. (indieWIRE) 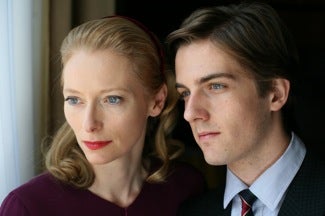 Patrick Goldstein examines the left-field choice of Scottish-born communications strategist MT Carney as the new head of Disney marketing. He is not convinced that Carney (whose mantra at Naked Communications was to eschew traditional ad buys as the backbone of marketing and promotion) is going to fit in Hollywood, or at Disney – and neither are the (anonymous) insiders he talks to: "I got news for her — tweeting good things about Jake Gyllenhaal ain’t gonna magically make people want to go see ‘Prince of Persia,’” said one. “Do you really think we’d spend $50 million to open a movie if we didn’t have to?" Carney, Goldstein suggests, is going to need a very thick skin, because “she’s going to be second-guessed by everyone in Hollywood who thinks they know more than she does.” Including bloggers. (The Big Picture)

Stuart Elliott runs down the marketing tie-ins for “Sex and the City 2,” and it’s a long list that includes Skyy vodka, Moet & Chandon Champagne, Lipton Sparking Surprise tea and Hewlett-Packard PCs and notebook computers, with star Sarah Jessica Parker appearing in HP commercials. A couple of cogent commenters put the issue in perspective: one wonders why Elliott is “surprised about product placement in a movie about women whose primary activity is shopping or fantasizing about shopping,” while another answers the question asked in the headline (“What’s Next, the Official Salad Dressing of ‘Sex and the City’ 2?”) with an entirely sensible answer: “Of course not. Women that thin don’t put dressing on their salads.” (Media Decoder)

Alex Gibney, the documentary king of this year’s Tribeca Film Festival, explains the difference between Eliot Spitzer and Tiger Woods to S.T. VanAirsdale. The key, he says, is that Woods’ mea culpa press conference was a “media-managed apology” that Gibney found “repulsive in the extreme,” whereas the disgraced former New York governor agreed to an honest give-and-take with the filmmaker for his untitled Spitzer documentary that screens at Tribeca. Gibney also says people have talked to him about doing a Woods doc, but “I don’t know if I’m interested in it.” Sadly, lots of other people would be. (Movieline)

Another documentarian talks about another movie about another controversial, high-profile figure: the filmmaker is Barry Avrich (“The Last Mogul”), the subject Harvey Weinstein. The film exec, Avrich tells Martin Knelman, calls him regularly to try to talk him out of doing the movie – but the director remains fascinated by Weinstein:
"Half of Hollywood thinks of Harvey as a monster. The other half thinks he’s a genius.” When Avrich talks about the people who’ve agreed to be interviewed for his doc, though, I get nervous. He mentions novelist John Irving (“The Cider House Rules”), Variety editor Peter Bart and writers Ken Auletta and Peter Biskind – in other words, he’s falling back on the old trick that says if you can’t get participants in a story to talk openly, you can simply use other journalists as your sources. (TheStar.com)