In this morning’s roundup of Hollywood news ‘n’ notes from around the web, an expensive festival gets an encore, and CBS Films is scrutinized after a pair of lackluster movies.

Jen Yamato reports from the inaugural Turner Classic Movies Film Festival in Los Angeles, which screened more than 50 films over four days (“A Star Is Born,” “Metropolis,” “Saboteur”) and ended with the announcement that it’ll be back for a second installment next year. Though special guests like Eva Marie Saint, Tony Curtis and Ernest Borgnine were admittedly draws, Yamato insists that one of the keys to the festival was TCM host Robert Osborne, aka “the Pope of Movies.” Only without that ugly scandal stuff the real pope has to deal with. (Cinematical)

Steven Zeitchik, meanwhile, thinks that the TCM festival could be a “glimpse into the future of movie-going,” pointing a way toward “making the film-going experience unique and even exciting.” I agree in principle – the programming was a cool potpourri of classics, and the lineup of special guests was a kick – but I suspect that Zeitchik didn’t pay for the screenings he attended. For the general public, the TCM fest was more problematic: its website pushed full-festival passes that started at $499, or more than $100 a day for the four-day lineup; for moviegoers who didn’t want to shell out that much, it (reluctantly, it seemed) pointed out individual tickets, if available, were $20 and $30 apiece. If that’s a glimpse into the future, moviegoing’s about to get a lot more elite, which shouldn’t be the idea. (24 Frames) 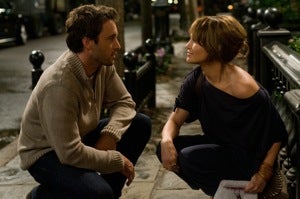 Last year, CBS chief Les Moonves had drinks with Patrick Goldstein and explained the business plan for the recently-launched CBS Films: don’t take big risks, stick to the $30-to-$50-million budget range, make nice movies with likable stars. Now, after the release of “Extraordinary Measures” and “The Back-up Plan” (left), Goldstein takes aim at that business plan: “nice doesn’t cut it, not in today’s unbelievably competitive marketplace … ” Plus, he says, the CBS Films marketing is no good and the name makes people think of TV. So he suggests that they spend more money and find “an injection of irreverent, unruly, manic energy.” (The Big Picture)
At the Daily Beast, Peter Lauria also weighs in on Moonves and CBS Films, though his take doesn’t involve drinks with Les or recommendations of strategic craziness. His conclusion: on paper it makes sense for CBS to get into the movie business, but in reality it’s been troublesome. A company spokesperson insists to Lauria, though, that “The Back-up Plan” will eventually turn a profit: “We expect this film to hang on for a long time. Lopez films have great legs, as does Jennifer herself.” Yes, a spokesperson actually said that. (The Daily Beast)
”It’s easily the biggest change in cinema since the advent of sound,” says director George Miller. No, he’s not talking about 3D, but about the now-standard computer-generated images. Australian journalist Garry Maddox talks to a pair of Aussie directors, Miller and Philip Noyce, about using CGI to erase that truck that’s in the shot, or to create million-dollar sets for $100,000. But just as Miller says that “cinema went backwards” after the introduction of sound, so Maddox hears cautionary tales about the new technology … and just as “Clash of the Titans” is the poster child for bad 3D, it seems to serve the same function for bad CGI. (Sydney Morning Herald)

Halfway through the Tribeca Film Festival, Howard Feinstein surveys the action. He’s got serious qualms about the whole enterprise – particularly the “umbrella organization,” which he finds is modeled after a Hollywood studio, is more L.A. than New York, and is unnecessarily besotted with big names. But he found some movies he liked: Alex Gibney’s “My Trip to Al-Qaeda,” Keith Bearden’s “Meet Monica Velour,” and particularly Dana Adam Shapiro’s “Monogamy,” the first narrative feature from the director of the documentary “Murderball.” (Filmmaker Magazine)